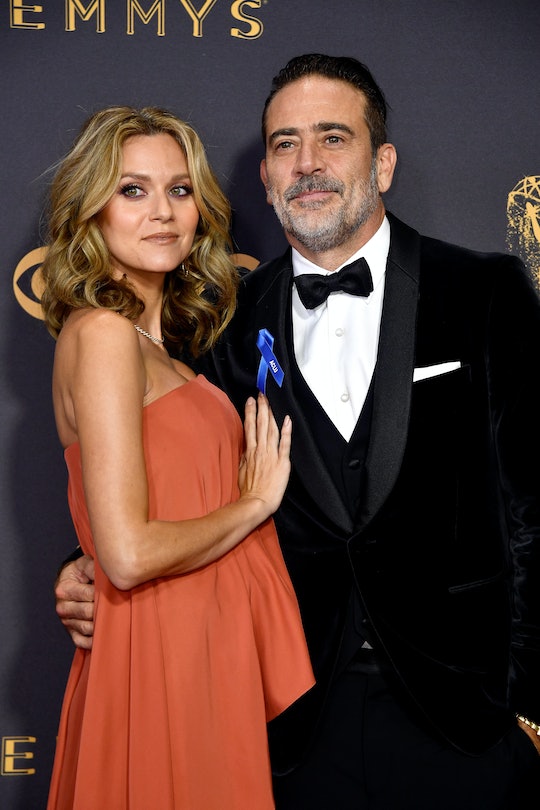 Few things in life are scarier than a toddler suddenly going quiet because that usually means one thing: trouble. Unless you're a parent (or a childcare provider), you have no idea how little time it takes for a toddler to get into something they shouldn't and make a giant mess. It's absolutely wild how fast and how sneaky they can be sometimes. And recently, one celebrity couple experienced what can happen if you let your guard down. What am I talking about, exactly? Look no further than this video of Hilarie Burton's daughter covered in face cream. Talk about a quintessential toddler moment, right?

As a refresher, the former One Tree Hill actress and her husband, actor Jeffrey Dean Morgan, share two children: A son born in 2010 named Augustus, and a daughter born in February 2018 named George. Which means little George is about 18 months old at this point, aka the prime age for toddler shenanigans.

On Sunday, Aug. 25, Morgan took to Instagram to share what happened when his daughter went suspiciously MIA for what seemed like a moment. "Well.... so George found Hil’s really expensive face cream," the father of two captioned his post. "I swear... it all happened in like 1 minute... my watch. My fault. Guess who owes mama @hilarieburton a new batch of magical face sauce? Bath time sucked."

Burton added to the narrative, commenting, “'Don’t be mad!' you hollered from the other room. 'Just pull out your camera!' You are WRAPPED, Daddy. Better hope she never gets her hands on your Mustang! Love you, ya ol’ softie." LOL.

The video didn't disappoint, of course, as it showed George sporting a cream-covered hairdo.

"George Morgan, what did you do?" Burton asks her daughter in the clip.

"She got quiet for a moment and just, well..." Morgan explains as George smears face cream — which is completely coating her hair — onto her daddy's face. "Your hair is beautiful," he says with a smirk.

"George, look at me," her mother says, feigning a stern voice.

"And she used it everywhere except her face," their son, Augustus, points out in between giggles.

"George Morgan, did you use all of my face cream on your head?" Burton says.

Despite what his character Neegan in The Walking Dead might suggest, Jeffrey Dean Morgan is clearly a total softie IRL, especially when it comes to his kids. But it makes sense that little George has her daddy wrapped around her finger, considering how long it took for Morgan and Burton to have her in the first place.

When Burton announced George's birth, she revealed it took five years — and multiple miscarriages — for her to become pregnant with their second child. "I didn't want to celebrate for fear of jinxing it. I didn't want a baby shower. I checked her heartbeat every day, up until the day she was born," Burton wrote on Instagram, according to USA Today. "And now that she is here, I just stare at her in wonder all day. I see her in her daddy's arms and I don't take any of it for granted. She screams bloody murder and I smile because she is so wildly alive."

So yeah, little George Morgan might have a little more leeway.

Plus, the way I see it is this: The kid has already made a giant mess, and you can either laugh about it and take photos/video, or you can cry about the money and time wasted. Personally, the former sounds so much more fun. Thanks for sharing your toddler's adorable naughtiness with us, Jeffrey Dean Morgan!

More Like This
Why Do Toddlers Throw Themselves On The Ground During Tantrums? They Have Their Reasons
No One Is Angrier About The Taylor Swift Ticket Disaster Than Moms
Hilary Duff Cut Her Daughter Mae’s Hair & Gave Her The Most Adorable Bangs
Chrissy Teigen Felt More Shamed For Using Formula Than "Pulling Out My Boob" In Public