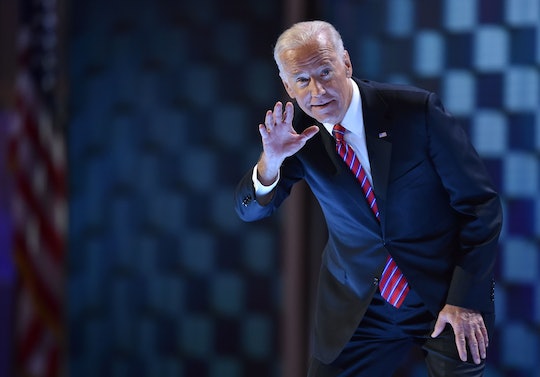 Last night, Vice President Joe Biden gave an emotional, rousing speech at the Democratic National Convention to rally support for Hillary Clinton. For the last eight years, we've gotten to know the former Delaware Senator who was chosen as Barak Obama's running mate back in 2008, and many have grown to love him. Video of Biden's DNC speech will let fans watch it over and over, so that they can remember just why he will be so missed when he leaves the White House.

Biden, regarded as a wonderful public speaker, actually stuttered throughout most of his childhood and overcame it by reciting poetry in front of a mirror.

You know what I know, for real. These are the people who are the heart and soul of this country. It's the America that I know. The America that Hillary knows and Tim Kaine knows. You know, I've known Hillary for well over 30 years. Before she was first lady of the United States, when she became first lady. We served together in the United States Senate. And during her years as secretary of state, once a week, we had breakfast in my home. The vice president's residence.

In 1972, he was elected to the U.S. Senate — making him the sixth youngest senator in U.S. history. Tragically, the joy of this achievement was shortlived, as just a few weeks later his wife, Neilia, and 1-year-old daughter Naomi were killed in a car accident. His two young sons, Beau and Hunter, survived.

Biden almost resigned from politics in the wake of such an unthinkable tragedy, but he was convinced to stay by Senate Majority Leader Mike Mansfield. In order to be at home with his young sons in the evening, he commuted an hour and a half both ways to and from Washington D.C. and the suburb where they lived.

For the next five years, Biden was a single father and gave standing orders in the Senate hall that if either of his sons called, he was to be interrupted. In 1975, his brother set him up with a woman named Jill Jacobs. It was meant to be a blind date, but in fact, Biden had already noticed her picture on an advertisement for a local park in Delaware. They married in 1975 and have one daughter together.

Biden unsuccessfully sought the Democratic nomination for president in 1988, and again 20 years later in 2008, which was kind of fine, because he ended up then-Illinois Sen. Barack Obama's VP pick. Biden said during his speech of his wife and of Hillary Clinton:

My daughters and granddaughters can do anything any son or grandson can do, and she will prove it, Mr. Mayor. So let me say as clearly as I can, if you live in the neighborhoods like the ones Jill and I grew up in, if you worry about your job and getting a decent pay, if you worry about your children's education, if you're taking care of an elderly parent, then there's only one, only one person in this election who will help you. There's only one person in this race who will be there, who's always been there for you. And that's Hillary Clinton's life story. It's not just who she is. It's her life story.

Last spring, Biden's son Beau died at age 46 after a two-year struggle with brain cancer. Biden once again tapped into his personal grief to help launch Cancer Moonshot, an initiative to accelerate funding for cancer research.

In the wake of his moving speech, Twitter was once again agog at VP Biden, who no doubt will go down as one of the most beloved vice presidents in U.S. History.