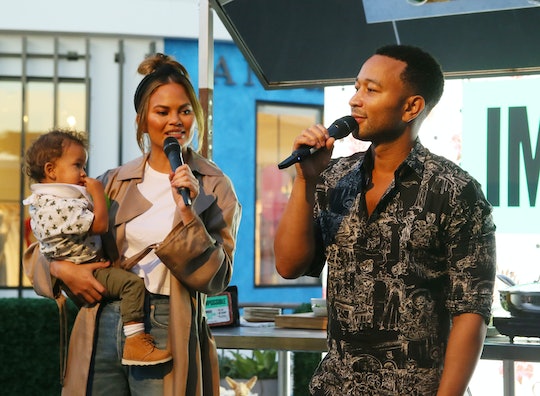 He's earned himself an Emmy, Grammy, Oscar, and Tony award, but it looks like one of his best moments is still playing for an audience of one. Over the weekend, Chrissy Teigen shared a video of her husband John Legend and baby Miles playing piano together and it's so, so precious. Teigen, aka the woman who brought Miles into the world, shared the adorable footage of the sweet father-son moment on Instagram, where people can't get enough.

"Stop everything," Teigen prefaced the sweet clip with her signature sense of humor. In the footage, little Miles, who's now 1 year old, sits close to his daddy on the piano bench while Legend starts playing "My Favorite Things" from The Sound of Music. And, listen, I know Miles is young, but in the video, it really seems like he's already pretty good on a keyboard, matching his dad's notes at times. I guess you could call him a natural?

Needless to say, Teigen's followers absolutely loved getting to watch this exceptionally sweet moment between Legend and Miles. (Personally, my favorite part is when Legend starts singing the famous lyrics to the song, and he and Miles exchange a father-son smile.)

"Oh my flipping lord," Gwyneth Paltrow commented on the video, while America Ferrera chimed in to say, "This is heaven." Vanessa Hudgens wrote, "I can’t stop watching this." And Jessica Alba accurately noted, "It’s VERY Sweet."

Between all of the adorable family moments Legend and Teigen share with their fans on social media, it's easy to forget that music is actually one of the first things that really brought them together. In fact, Luna, the couple's 3-year-old daughter, and Miles' folks first met while filming a music video for one of Legend's biggest hits in 2007, "Stereo," according to HuffPost. Since then, unsurprisingly, music has been a big part of the Teigen-Legend household.

For example, as you may remember back in 2017, when Luna was just a little babe herself, Legend practiced for his Oscar performance with his daughter on his lap. "Practicing for La La with Luna," Legend captioned the photo of him with his baby girl, referencing his work on the soundtrack for La La Land.

Teigen also gets in on the musical fun, of course. In December 2018, she shared a video of her and Luna's "nightly ritual," which includes dancing and singing "A Whole New World" from Aladdin.

Legend has previously spoken about how being a parent is a creative inspiration for him as a musician. In an interview with TIME in 2016, Legend said that becoming a father "has helped [him] write certain songs about what it’s like to be embarking on this new journey." He also shared that, like all parents, he "just [wants] the world to be the best place for your kid to grow up in — safe and loving and a place where she can dream anything and be able to do it."

Who knows, maybe Miles and Luna's dream one day will be following in their dad's musical footsteps. In the meantime, let's hope Teigen and Legend keep on sharing these precious family moments.