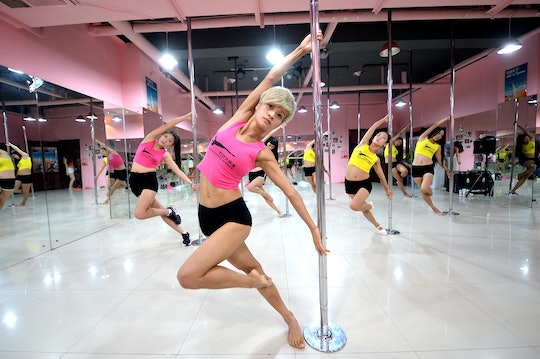 Video Of Kids Pole Dancing Is Making The Internet Freak Out, But Here's Why It Shouldn't

On Monday night, while scrolling through Facebook, I came across a headline that stopped me dead in my tracks: “Viewers 'disgusted' by 8-year-old children pole dancing on This Morning.” Excuse me? What? Children are pole dancing now? I was shocked, horrified, and disgusted, and then I clicked into the article. And, as I read the article and as I watched the video in question, I settled down and — admittedly — became embarrassed by my earlier overreaction. These girls weren't "strip club dancing" or provocatively dancing. They were just dancing fiercely, strongly, and even acrobatically. They were just dancing with a pole as a prop. But this got me thinking about the headline, and about my own reaction. Perhaps the dance wasn't the problem. No, it occurred to be that people's reactions are the problem.

The “pole,” and “pole dancing,” has a long, colorful, and multi-cultural history, i.e. there is the “Chinese pole,” the “Indian pole,” circus-based poles (the “Dutch pole” and the “French pole”), and the modern-day, Western World pole. And while pole dancing has been synonymous with strip clubs, the red-light district, and lap-dancing clubs since the '80s, as the International Pole Dance Fitness Association (IPDFA) explained, pole dancing hasn’t always been provocative or about sex — and in places like China and India it still isn’t.

Which brings me back to the pole performance heard round the world — figuratively and literally:

Two of the dancers in question are 8 years old and one is 11, and all three dancers were accompanied on-set by their mothers and dance instructor Zoe Hardy, according to ITV.com. The segment was designed to address the elephant in the room: are pole dance fitness classes too sexual for children? And the resounding answer — at least on Twitter — was yes: abso-freakin-lutely!

Many were offended by the act itself:

While others took issue the pole and their outfits:

But maybe neither are “the problem.” There is nothing inherently sexual about dancing with props or about acrobatics on a pole. People do it all the time in circus shows. The real problem is people's perception and their reactions. The "shock-value society" that society places on young women partaking in anything at all related to actions they take with their bodies is part of the problem.

There are a few questions people should be asking themselves before getting angry about this video.

Is pole dancing a legitimate type of dance? Sure, why not. Hell, it is just as physically exerting as any other form of dance and — in many cases — it is a blend of traditional dance and gymnastics.

Let me be clear: I’m not suggesting little girls run around in pasties or “strip club-like attire,” regardless of what type of dance they perform, but I am suggesting that people are unjustly stigmatizing these young ladies and pole dancing as a whole. Many young girls wear makeup during dance competitions, many wear tight-fitting costumes and short shorts at dance competitions, and many young girls become smarter, stronger, and healthier because of dance, according to EverydayHealth.com.

What about this dance is wrong? Is it what the girls are actually doing or what people imagine they are doing? Because, in reality, they are 8 and 11 years old and they aren't doing anything wrong or sexual. Society is labeling their actions in those ways.

Here’s the thing: I watched a 30-second clip of their performance — it seems the full video and interview is difficult to come-by stateside — and what I saw wasn’t problematic. What I saw wasn't sexual, provocative, or risque. What I saw was three young girls spinning and twirling — three young girls who were focusing on their lifts, timing, angles and execution. I saw three young girls trying to nail their “routine.” But what I see in response to their performance is hate and judgement. I see criticism and “slut-shaming.” And shaming these girls — and their parents — only perpetuates the cycle of shaming young women endure not only in dance but in every aspect of their lives (for example, in school when they wear something that might be "distracting" to boys).

So, while pole dancing may not be everyone's cup of tea, people should remember that these are young girls: Young girls who are seeing every word people write and hearing everything people say. So, people have an obligation to send them the right message and acknowledge that, yes, dancing can be sexy but only because society has sexualized it (and continue to sexualize it). Society should tell these girls that they are awesome for doing something so physically challenging and disciplined, and society should tell them that they aren't asking for anything — especially sex — by dancing with a prop.