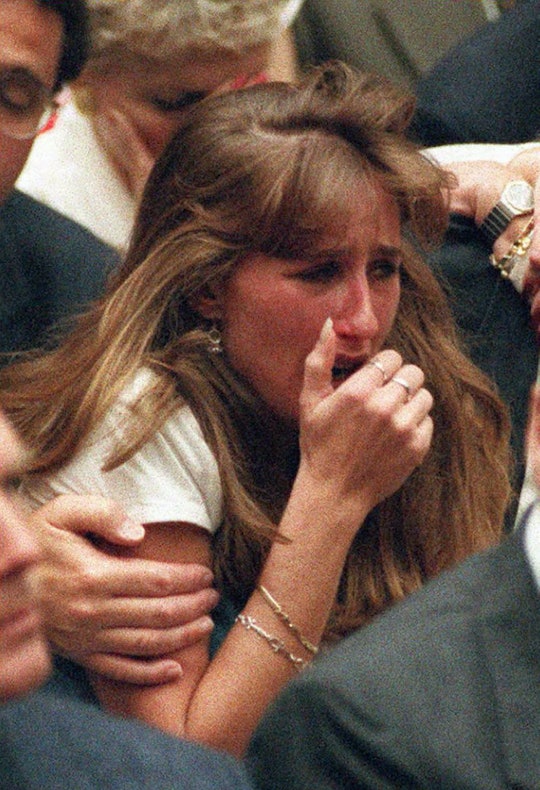 Video Of Kim Goldman After The O.J. Simpson Verdict Is Heartbreaking

Having your most painful moments captured on video forever is a kind of horror unique to our modern age. It's something Kim Goldman has had to live with for the last twenty years, as the image of her grief at the reading of the verdict in the O.J. Simpson trial continues to make heartbreaking impact. Kim was sister to victim Ron Goldman and in many ways the enduring image of her at the trial represents a kind of pain that can never really be healed. The video of Kim Goldman's reaction to the Simpson verdict is just as heartbreaking as it was when it first aired in 1995.

In the video, when Simpson is declared not guilty first for Nicole Brown Simpson's murder, then for Ron Goldman's, Kim's sobbing can be heard clearly. The camera pans away from Simpson himself to focus on her in her father's arms, and her crying can continue to be heard once focus returns to the restrained celebration of the defense team. Years later, she shared her thoughts during the verdict. "I was thinking that Ron's verdict may be different. I don't know why I thought that, but I wanted to hear Ron's verdict loud and clear. I just couldn't believe it. I felt shock and despair and betrayal, and Judge Ito told everybody to quiet down and tried to get control of the courtroom. We just got up and walked out."

In the years since, Kim has spoken about her own unresolved feelings, as well as how the intense media scrutiny made a horrible situation even harder to get through. Struggling with those feelings led to the publication of her book Can't Forgive: My 20-Year Battle with O.J. Simpson, where she writes about how inescapable the trial was and how that compounded her pain: "I couldn't manage the pain, and everywhere we went, everybody was talking about it and had an opinion about it. I couldn't escape it, no matter what I tried to do [...]."

In a segment for Oprah: Where Are They Now? Kim also discusses her immediate feelings while the verdict was being read. Though she had not been hopeful for a guilty verdict after sitting through the many months of court proceedings, it still blindsided her when she heard the announcement. She "fell apart, shaking and crying." She also alleges that defense attorney Johnnie Cochran looked over at her and said, "Gotcha" (which cannot be seen in the above video, though the camera does not focus on Goldman or Cochran for the entire time).

Kim's anguish underscores one of the biggest moments of the trial. Her family was never able to get justice for the death of their loved one, and it's something that they have all had to learn to live with. Kim is in a better place now, a successful writer and counsellor, but she has also had to come to terms with the fact that she may never make peace with her brother's death.