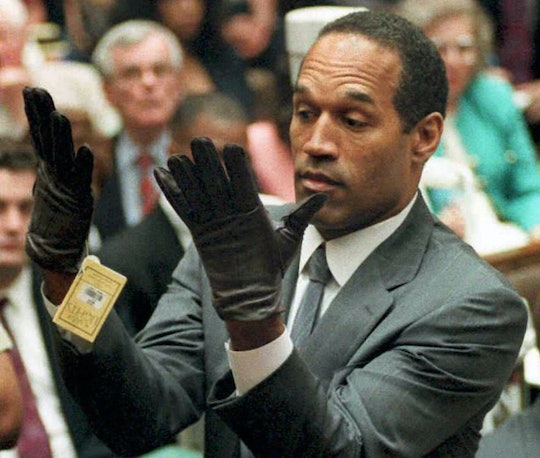 Video Of O.J. Simpson Trying On The Gloves At His 1995 Trial Is Tense & Fascinating

The creators of The People v. O.J. Simpson: American Crime Story have touted that the show will give audiences a rare look at the stories and events that unfolded behind the scenes during the Trial of the Century. The O.J. Simpson murder trial in 1995 was and remains one of the most televised and widely watched court cases in history. Tuesday night's episode promises yet another unique glimpse into the case — specifically, the prosecution's debate as to whether or not the defendant should try on the so-called "murder" gloves in court. We all know how it panned out: 21 years later, we have video of O.J. Simpson trying on the gloves.

Even so, Simpson was acquitted of all charges on Oct. 3, 1995. All these years later, the decision to have Simpson try on the gloves still haunts former Los Angeles County prosecutor Marcia Clark, who recently spoke to Dateline about the case. It was a fraught decision between herself and her co-counsel, Christopher Darden: "That was not my call. I did not want him [Simpson] to try on the evidence gloves. I never did."

While Tuesday's episode of The People v. O.J. Simpson will take a deeper look at Clark's battle against Darden, here's how it looked to the public back in 1995.

It was June 15, 1995 — more than halfway through the trial, although that fact wasn't known at the time. Simpson, the former football player and Hall of Famer, stood up in the courtroom wearing a pair of white latex gloves. Co-counsel for the prosecution, Christopher Darden, first handed Simpson the left glove retrieved at Simpson's Rockingham home; according to court transcripts, Darden noted at the time that Simpson "seems to be having a problem putting the glove on his hand."

Darden then gave Simpson the right glove. With both gloves on, Simpson showed his hands — and how the blood-soaked gloves didn't fit — to the jury. As Simpson faced the jury, Darden remarked:

Mr. Simpson is indicating that his fingers aren't all the way into the gloves, your Honor. Mr. Simpson told the jury that the gloves are too small.

The prosecution — specifically Darden — believed having Simpson try on the gloves would prove his guilt. It was a risky move for the prosecution, one that clearly didn't work in their favor and contributed to one of the most iconic lines of the entire trial — defense attorney Johnnie Cochran's closing argument: "If it doesn't fit, you must acquit!"

There have been speculations as to why the gloves didn't fit. In 2012, Darden alleged that Cochran had "manipulated" one of the gloves before Simpson tried it on in court. In an interview with The Telegraph, Darden said: "It's been my suspicion for a long time that the lining has been manipulated." Simpson's former lawyer never had the opportunity to refute Darden's claims: Cochran died in 2005.

Rheumatoid arthritis may have been another factor that contributed to the poor fit of the gloves on Simpson's hands. The hereditary condition causes inflammation of the joints: Simpson's mother, Eunice, also suffered from rheumatoid arthritis. According to Lawrence Schiller, author of American Tragedy: The Uncensored Story of the O.J. Simpson Defense, Simpson had rheumatoid arthritis for which he took medication; he stopped taking his medication about a month before the defense team estimated the court would get to the issue of the gloves. In a 2015 interview with ABC News, Schiller said that "Nobody knows whether it made his hands a little bigger or not."

Speaking to Romper, Schiller offered the following clarification: "Nobody on the defense knew what Simpson was doing except [Robert] Kardashian, in terms of taking his medication. It wasn't something the attorneys plotted with him. Kardashian was the one who discovered it [that Simpson wasn't taking his medication] one day while talking to Simpson."

Simpson's attorneys did not respond to Romper's request for comment regarding their client trying on the evidence gloves.

It was a powerful, defining moment of the Simpson murder trial: The image of Simpson holding up his gloved hands remains as memorable today as that of Simpson's white Ford Bronco speeding down a California freeway, and video of the moment proves just how tense and crucial the moment was.