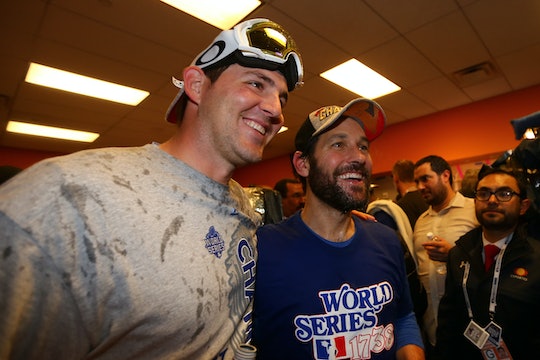 Really, there's not a day that goes by where I don't feel Paul Rudd deserves a beer shower. The man is a national treasure fitting of a Nicolas Cage movie. He's charming! Ageless! Hilarious! And, most of all, he was and will forever be Josh from Clueless, and we're all still totally buggin' thinking about him. So it was a thrill to watch video of Paul Rudd getting a beer shower from the Kansas City Royals, if only because whenever Paul Rudd is happy, I am happy.

And, boy, was he happy — Rudd has been a fan of the Kansas City Royals since childhood, and even joked in the past that he would throw a party at his mom's house if the Royals ever won the World Series. ("She's out of town, I've got a keg. It's going to be sweet," he said in 2014.) But, last night, Kansas City Royals third baseman Mike Moustakas did him one better, spraying Rudd with a beer after insisting he was "way too dry."

Rudd clearly enjoyed the moment as much as we all are today. "I haven't thought about anything," Rudd told reporters. "I can't even believe I'm standing here right now. I don't know how I snuck in."

As I said, national treasure.

More Like This
Zoe Saldaña Shared A Rare Video Of Her Three Sons Recreating A 'Zoolander' Scene
Dwyane Wade's 4-Year-Old Daughter Kaavia Recorded A Sweet Video For His 41st Birthday
13 Is "Too Early" For Kids To Be On Social Media, Surgeon General Cautions
Adam Levine & Behati Prinsloo Welcome Their Third Baby & This Is Where It Gets Real
What Parents Are Talking About — Delivered Straight To Your Inbox