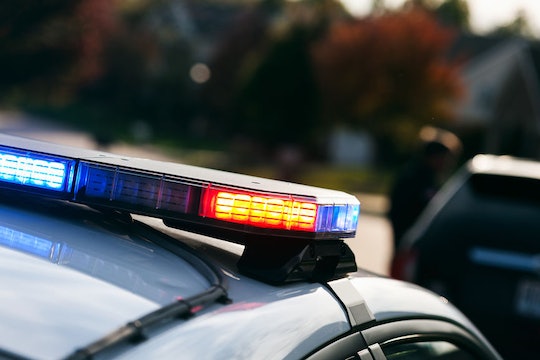 Excessive force by police officers against people of color isn't exactly a new phenomenon. Obviously, that doesn't make it acceptable — or any less terrifying. But time and time again, routine traffic stops have escalated to the point of law enforcement officials drawing their weapons and shooting people of color. Or physically abusing them as they're being arrested. Or simply targeting people of color for stops in the first place. And this video of police pulling guns on a family after a 4-year-old allegedly shoplifts a doll is outrageous.

A Phoenix couple is seeking $10 million from the city after an incident that happened last month, according to NBC News. On May 29, Dravon Ames and fiancee Iesha Harper reportedly didn't realize their 4-year-old daughter walked out of a Family Dollar store with a doll that wasn't purchased. Soon after leaving the store, Ames pulled into an apartment complex to drop off their daughter with a babysitter — when police officers starting banging on their windows with their guns drawn while threatening them. Romper has reached out to the Phoenix Police Department, but did not immediately hear back.

Several videos of the encounter have been recorded by witnesses — one of which was actually shared by the Phoenix Police Department via Facebook. In a ground-level video, an officer can be heard shouting, “Get out of the f*cking car," CNN reported. An officer can be seen handcuffing Ames on the ground, and then against a police vehicle, before kicking him and punching his back, yelling, “When I tell you to do something, you f*cking do it.” Ames can be heard saying, "I’m sorry, I’m sorry," while appearing to comply.

Unfortunately, it doesn't get any better from there.

Meanwhile, a different officer can be seen pointing a gun at Harper inside the family's car — with their 1-year-old and 4-year-old inside, mind you — while another officer yells, “You’re gonna f*cking get shot!" CNN reported.

As NBC News reported, Harper explained at a news conference that she was trying to tell the officers she was in a backseat with her kids and couldn't immediately get out of the car. “We're yelling out, ‘The door doesn’t open that side. It doesn't open.’ Obviously I don’t have a gun with two kids in my hands," Harper said.

When Harper — who was five months pregnant at the time — and her two children eventually did make it out of the car, an officer can be seen trying to take the 1-year-old from her. After Harper was arrested, handcuffed, and inside of the police car, the officer said, "I could have shot you in front of your f*cking kids," according to the claim filed by the family's lawyer.

“I really thought he was gonna shoot me in front of the kids,” Harper told CNN.

In a video shared by the Phoenix Police Department's Facebook page, Police Chief Jeri Williams said she was “disturbed by the language and the actions of our officers.” Williams explained that an internal investigation had begun as soon as she was aware of the video. “I assure you that this incident is not representative of the majority of Phoenix police officers who serve this city,” she said. “I wish investigations could be handled instantly, but each one takes time and deserves the due diligence before we can discuss specific details.”

Ames and Harper have since filed a notice of claim against the city of Phoenix for $10 million. The city now has 60 days to respond to this notice, at which point the next step would be filling a lawsuit, according to the family's attorney, Thomas Horne. Horne also put the disturbing incident into perspective. "We're talking about a little doll that's worth maybe $5 and the horrors that came from the overreaction to that," Horne said, according to CBS affiliate KPHO.

"After this, me and my daughters will never be the same anymore or feel the same for police because it seems like every police is out for blood or something," Harper told KPHO. "We wasn't really doing anything," Harper said during a press conference.

Although the details surrounding the incident are still being investigated, I can't imagine how scared this family must have been at the time. Having guns pointed at you and police officers swearing, using excessive force, and completely overreacting over a "shoplifting" incident is utterly ridiculous. Especially considering it was a freaking doll allegedly taken by a 4-year-old girl. Hopefully this family is able to eventually move past such a traumatizing encounter with law enforcement.