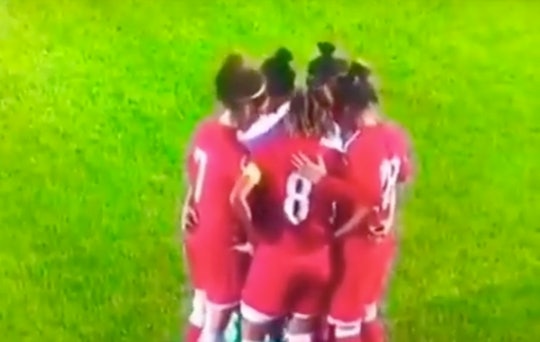 When This Athlete's Hijab Began To Fall Off, Her Opponents Beautifully Took Action

Sometimes, there are moments that truly restore one's faith in humanity and remind us of the good in the world. A perfect example of this happened recently when a group of soccer players promptly huddled around their opponent as she fixed her hijab that was falling off in the middle of a game, nearly showing her hair. It was a beautiful display of what true sportsmanship and respect for others looks like.

During a recent match in Jordan, one player's hijab began to fall off after a particularly challenging kick, according to ESPN. It was only seconds into recognizing what had happened that the opponents who were playing against her, representing the Shabab Al Urdon Club, actually began surrounding her so she would be totally hidden until her hijab was reset. Upon realizing what was happening, more players from the opposite team joined in, creating a human barrier around the player, from the Amman Club, who was on her knees until she was able to have it on completely. After that, the game continued on as normal.

"Bigger than sports," ESPN captioned a video of the profound moment on Twitter. "When a soccer player's hijab started falling off to reveal her hair, her opponents gathered around to provide cover while she fixed it."

Fans and followers seemed to agree. "Maybe there is hope for this world," replied one individual, whose comment received the most 'likes' of the whole thread. "It was a kind gesture. Sadly, I wouldn’t have known to do that, and I’m glad that they did!" said another.

For those who are unfamiliar, wearing a hijab is a practice among Muslim women across the world. The traditional head-covering is often "worn as a symbol of cultural identity, piety, and modesty," according to the U.S. National Library of Medicine. And in recent years, popular sports brands have included the practice into their products and advertising. For example, back in 2017, Nike released a line of hijabs specifically for athletes, The New York Times reported at the time. The "Pro Hijab" is made with "lightweight, breathable" fabric and a long back to help prevent untucking with movement.

Though most understand the religious and cultural importance that wearing a hijab holds for many women, others are disrespectfully more critical. In fact, this was even seen in the comments of ESPN's post. While many applauded the teammates for respecting their opponent's cultural preferences, others questioned why one needed to wear a hijab in the first place.

Fortunately, though, most reactions were positive and pointed out how beautiful it was to see these girls supporting each other. For instance, author Glennon Doyle shared the video on her Instagram with the caption: "This is our mood today. When one of us needs us: We stop. We huddle up. We protect each other. I love the soccer. I love women."

Indeed, what happened at this soccer game was a great display of respect and cross-cultural understanding, and stood more as a symbol of our humanity than the aspects of our lives that may divide us.