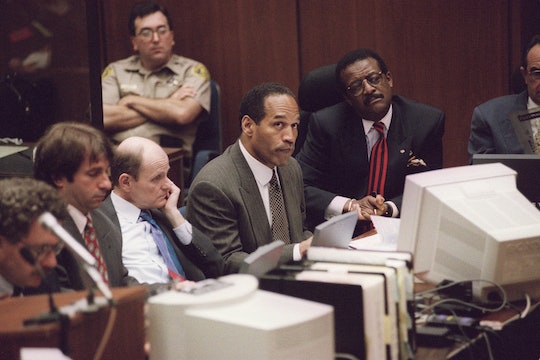 Video Of The O.J. Simpson Verdict Being Read That Shows The Varying Reactions

The finale of The People v. O.J. Simpson: American Crime Story focuses on the end of the trial: namely, the verdict and its immediate aftermath. It was a television event, and everyone was waiting with bated breath to see what the outcome would be in the trial of the century. The show hypes up the sense of anticipation by cutting actual news footage into the fictionalized show, bringing viewers right back to that point in history and making it seem as uncertain as it did while it was happening. Of course, we know the outcome: O.J. Simpson was found not guilty. Video of the verdict being read is still available, and it's something to see.

The highly televised nature of the trial changed the game in a lot of ways. The immediacy with which the news was brought to the public is commonplace now, but it wasn't in 1995, with the internet in its infancy and no Twitter feed to help you out if the major news networks were slacking. People gathered in their homes to watch the verdict being read. They gathered in Times Square to watch it on a jumbotron. They watched alongside the television personalities and news anchors, everyone getting the answer at once. No wonder it caused such a fervor.

In the footage, the initial reactions vary. Defense attorney Johnnie Cochran has the most visible reaction, clasping Simpson on the shoulder and repeatedly giving him something of a half-hug. Simpson looks relieved, smiling, but restrained. Robert Kardashian's expression is unreadable, perhaps speaking to the doubts he would later express about Simpson's innocence. The prosecutors, Marcia Clark and Chris Darden, are stone-faced. But the most heartbreaking part of the video by far are the sobs of Ron Goldman's sister, which seem to echo in the otherwise quiet courtroom.

There is also plenty of video of people's real-time reactions, and those are a great deal less composed. In Times Square, in the audience of Oprah Winfrey's talkshow — everywhere — crowds are at a standstill until the verdict is announced, at which point there is a clear divide in response. The people who are happy are really happy, cheering and jumping up and down. Those who are less so merely stand around in shock.

It speaks to both Simpson's importance within the black community at the time and to the successful work of the defense team, especially Johnnie Cochran. As a television personality, he had the ability to work the media coverage of the case to the advantage of the entire team and to inspire a sense of personal involvement in the public. "There you go, Johnnie!" shouts one man in a clip from Times Square (in the video below), making evident that this was as much his victory as Simpson's. Cochran not only was instrumental in the outcome of this case but also, in the minds of many, of bringing police corruption to light. The layers of the case go far beyond the basic details, and it's clear echoes of them still resonate today.