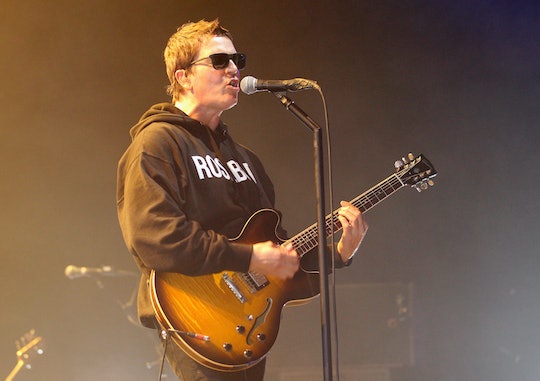 Hey, remember when Third Eye Blind was popular, like, 20 years ago? And now they're usually just rounded up in your local radio station's '90s rock weekend block? Well, they just got a whole lot more popular thanks to an amazing stunt they pulled Tuesday night. This video of Third Eye Blind's speech at the RNC has probably rekindled their entire career, thanks to having the chutzpah to confront Republicans — on their own turf, no less — about their backwardly conservative views on LGBTQ people and their rights.

The alternative rock band took the stage Tuesday night in a concert hosted by the Recording Industry Association of America and AT&T at the Rock and Roll Hall of Fame, just blocks away from the Republican National Convention. Third Eye Blind lead singer Stephen Jenkins launched into an impressively epic troll as he said this to his mostly Republican audience members:

To love this song is to take into your heart the message and to actually have a feeling to arrive and move forward, and not live your life in fear and imposing that fear on other people.

What makes "Jumper" such an apropos song for Third Eye Blind's progressive stunt at their RNC concert can be found right the song's first four lyrics:

I wish you would step back from that ledge my friend

And if you do not want to see me again

DAY-UM. No but seriously — what an incredibly ballsy statement to make. Fans weren't too keen on Jenkins' obvious castigation of Republican values, as his remarks were immediately followed by boos and then confused applause as the song began:

But that wasn't all that Jenkins had to say Tuesday night, either. Just as the video clip above begins, Jenkins can be heard talking about welcoming his "cousins — who are gay — into the American fabric." It was a subtle yet well-played jab at the Republican platform plank that opposes same-sex marriage. Later in the concert, in a splendid oh no he didn't" moment, Jenkins shouted out to the crowd, "Who here believes in science?"

If had only been just one comment, it could be said that Third Eye Blind just had to get something off their chest in an otherwise conservative environment. But with this level of trolling, it's clear that Third Eye Blind took advantage of a unique opportunity to make a point or two about the GOP. But then again, perhaps we should have all seen it coming. Earlier on Tuesday, Jenkins participated in the #RNCRockAnthems Twitter Chat hosted by @HuffPostComedy for "Stupor Tuesday" at the Rock and Roll Hall of Fame. Over the next few hours, the comedy Twitter account re-tweeted dozens of suggested song titles for as RNC rock anthems, such as "Sweet Home BlameObama" and "Pretty Fly (for an Ultra-Rich, Out-of-Touch, Elderly White Guy)."

Planned or not, Third Eye Blind has made another name for themselves this week: The bravest trolls at the 2016 Republican National Convention.