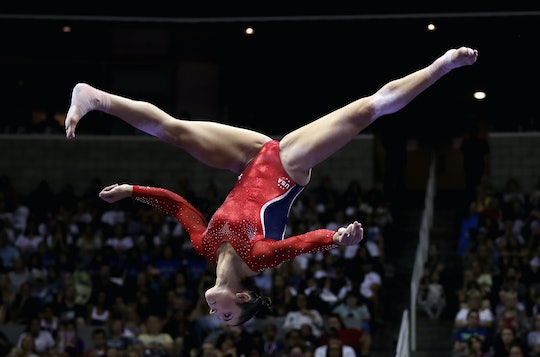 Season 16 aired in 2013, when Raisman was only 18 years old. She and her professional partner, Mark Ballas, were a great team, and it was no surprise that they went all the way to the show's finale, according to the Boston Herald. But despite their entrancing freestyle performance, they did not take home the mirrored disco ball. They lost to singer Kellie Pickler and professional dancer Derek Hough in a heartbreaking turn of events, according to JustJared.com.

In an interview with Us Weekly, Raisman said, "I am so excited. I have worked so hard at this. My goal from the start was to make the finale so now I just want to enjoy and cherish the last few performances and make tonight a night to remember!" For Raisman and viewers alike, it was a night to remember. It's clear in her dances that she is an incredible athlete and gymnast (she can't hide it!), but she was also graceful, energetic, and impressive.

In that final episode, she and Ballas danced a samba and a cha cha as well. Though she'd done hundreds of gymnastics floor routines and been watched by millions and millions of people during the Olympics, she admitted to still being a little nervous before her dance performances. She said in that same Us Weekly interview, "I'm normal nervous — not anymore than usual. Definitely not as nervous as I was for the Olympics. This is just for fun! It's the first time in my life that I am doing something different so I'd honestly rather enjoy it than anything else." It is clear from these videos that she is having a good time.

The season was filmed shortly after Raisman rocketed to fame in 2012 during the 2012 Olympics in London, England. She won an astonishing three medals over the course of the games. She won a gold medal with her team, a gold for her floor routine, and a bronze for her balance beam performance. Even without winning Dancing With The Stars, she's got quite a resume.

Raisman's incredible performance on Dancing With The Stars puts her in the good company of other gymnasts who have gone far on the show. Not long before Raisman's appearance, Olympian Shawn Johnson won her season. Fans will be able to see more of Raisman's talent in this year's summer Olympics where she'll be competing once again for Team USA.

More Like This
You Can Walk Through Barbie's Dreamhouse & Fulfill Your Childhood Dreams This Summer
'Call The Midwife' Has A Fascinating True Story Behind It
Take An Exclusive Look At A Brand New, Four-Part Peppa Pig Special
'Top Gun: Maverick' Is More Tween-Friendly Than The Original