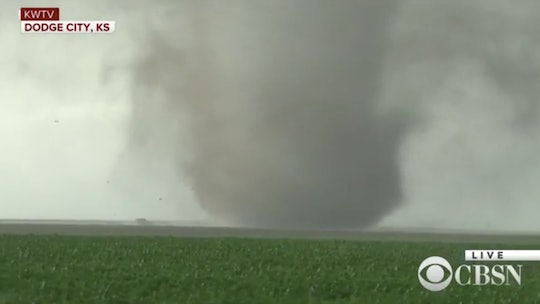 Videos Of Dodge City Tornado Will Give You Nightmares For Weeks

I am not from the Midwest, so I have no (seriously, no idea) how any of you out there deal with this extreme weather. Being from the tri-state area, I think I can relate to hurricanes and storms and floods, but I can't get into tornadoes because I've never seen one. But these videos of the Dodge City tornado would give any East Coast girl a reason to remember why they didn't move out to the middle of America with that boyfriend back in 2002. Deep breaths all around.

This afternoon, while everyone on the East coast was finishing up their day to semi-cloudy weather and the West Coast was — well, doing whatever cool West Coast people do, because it's always sunny and people rollerblade and drink beet juice in my head, Tuesday evening in Kansas was not so proper. It was mayhem.

Starting around late afternoon, officials warned Kansas residents of a tornado. The first one hit Dodge City around 7:30 p.m. ET, where several houses were damaged and a truck capsized. The storm was moving northeast through Kansas, and, as of Tuesday evening, continued to move in that direction at about 25 mph.

The tornadoes and insane storms, which include massive hail, are due to make their way through the region throughout the night. Most of Kansas remains on a weather watch until midnight CDT, according to weather services. Dodge City, however, bore the worst of it on Tuesday:

Some people, apparently people from Kansas, like taking videos of tornadoes as they pass through their lives. As a woman who has grown up very, very far away from any plains, I don't understand why these are "cool" videos or things to tweet. I love nature, but I am sure as hell never going to applaud or take video of it mangling my house. You tornado-people are hardcore. Whatever the case, those videos have now made the rounds on social media, where horrified users look on helplessly as the storms tear through farmland and nearly miss family homes on their brutal journey.

But be warned: Attempting to capture these types of videos can be extremely risky. According to the National Weather Service, when your county issues a tornado warning like it did on Tuesday afternoon, you should take your family underground, put away electronics, and wait for updates. Of course, Dodge City, Kansas: You did none of that while taking Vines and posting them to Twitter. Are you all insane? (I also secretly applaud you. I would be cowering in a basement trying to find a way to prematurely open a can of Campbell's soup. I would not last.)

Please, everyone in Kansas, get inside (even though you won't, you're going to get beers and sit on the porch and take videos, and bless your hearts). But seriously, get inside and drink those beers inside and talk about weather amongst yourselves. Leave the storm-chasing to the pros and meteorologists who can at least try to predict which locations and routes are safest.

Remember: Videos from your porch and dashboards are fun, but very scary. Like taking the subway at 3 a.m. scary. Interesting, but not worth it. Be careful.

With love, your fellow American, from the East Coast.