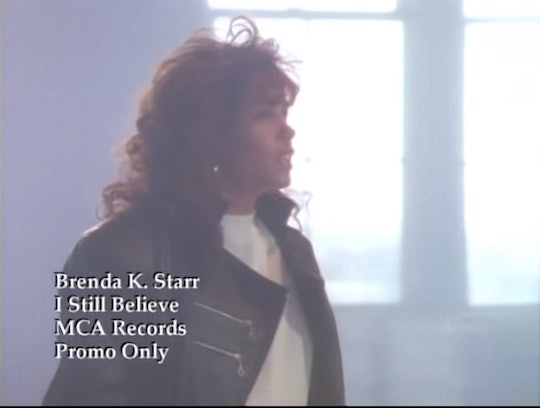 According to MTV.com, Starr got her start in the mid-80's, working as a pop singer. Her first album, "I Want Your Love," debuted in 1985. It wasn't until Starr moved to record label MCA when her song "I Still Believe" finally broke Starr into the mainstream and made her a hit singer. The song reached number 13 on the Billboard Hot 100 Chart back in 1988. Starr also reached number 24 on the Billboard Hot 100 Chart will follow-up single to "I Still Believe," "What You See Is What You Get."

However, after the 80's, no other song of Starr's could match the success of "I Still Believe." Since the 80's, Starr has released eight albums and continued to make music as well as albums in Spanish well into the 2000's. Most recently, Starr released salsa music album "Atrevete a Olivdarme" in 2005.

That being said, videos of Starr when she was a pop singer are a huge throwback.

The hair! Those bangs! The fabulous leather ensemble with that white mock turtleneck. Starr rocks her look, sings pretty damn well, and kills it with her arm movements and twirls while looking out over the Manhattan skyline. Despite the video being completely outdated, the ballad still holds up to this day and has me feeling some kind of way.

Another video shows Starr performing the song live in 1988 for an audience — sans bangs and teased hair but instead with a high ponytail and pants with suspenders. You've got to love 80's fashion trends, am I right? Starr sings her heart out on that stage and sounds just as amazing as she does on the recorded track. Also, look at those audience members. Their outfits? Just as great and memorable as Starr's.

In this video of her performance of "What You See is What You Get" Starr commands the audience and shows off just how strong of a performer she truly could be. Her dancing with the fast paced song and the way she interacts with the audience shows that entertainment is truly where she belongs.

With such a talented mom, Isabella is bound to go far in the Idol competition. If she can hold an audience the way Starr did in the 80's, I'm sure Isabella can do just as well on American Idol. However, it is up to America do decide whether or not she can do just that.