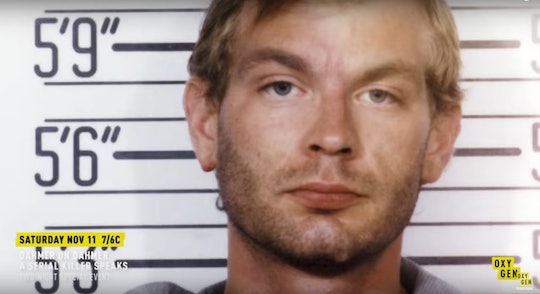 Videos Of Jeffrey Dahmer's Trial Are So Disturbing

Twenty-five years after Jeffrey Dahmer's conviction, Oxygen is taking a look back at his gruesome crime spree, his capture, and his short life behind bars before he was bludgeoned to death by a fellow inmate just two years into his 15 consecutive life sentences. Videos of Jeffrey Dahmer's trial feature graphic details of the murders he committed and depict how painful the proceedings were for family members of the victims. The two-part documentary from Oxygen is called Dahmer on Dahmer: A Serial Killer Speaks and it delves into the story from Dahmer's point of view using interviews performed by investigative journalist Nancy Glass, who secured the first televised interview with the serial killer from prison.

Dahmer confessed to killing 17 men and boys, frequently dismembering, cannibalizing, or performing sex acts with their bodies. He also performed grisly experiments with his victims when they were still alive, including attempts to lobotomize them. One of the most upsetting moments from the trial came when the family members of his victims testified to the suffering caused by Dahmer's actions. Nine people in all testified against him, but Rita Isbell, brother of victim Errol Lindsey, actually lunged at Dahmer during her testimony and had to be carried away by bailiffs.

"Whatever your name is, Satan! I don’t ever want to see my mother go through this again! Never Jeffrey! Jeffrey, I hate you!" she screamed at Dahmer in an emotional outburst prompted by her testimony. Going against many of the stereotypes we often see of serial killers, Dahmer actually seemed quite remorseful during his trial. He acknowledged that his crimes were heinous and expressed sorrow for the victims and their families. "I take all the blame for what I did," he said to the judge before sentencing. "I should have stayed with God. I tried and I failed, and created a holocaust."

He even expressed regret that the two police officers who botched his capture, leading to the death of another victim, lost their jobs. Two months before Dahmer was caught in 1991, a 14-year-old boy he had successfully lured into his apartment escaped. The boy was Laotian and didn't speak much English, but he found the help of three Laotian women, who were waiting with him in front of Dahmer's apartment when Dahmer returned from a beer run. Dahmer tried explaining that he and the boy, who he claimed was 19, were lovers who had a spat. When police arrived, they believed Dahmer's story, even at the women's insistence that the boy was bleeding and disoriented. They let Dahmer take the boy back into his apartment, where he eventually murdered and dismembered him.

Those officers wound up losing their jobs and Dahmer noted at the trial, "I hope and pray that they can get their jobs back because I know they did their best and I just plain fooled them."

And, of course, peppered throughout Dahmer's trial footage is video of law enforcement describing not only the gruesome scene at his apartment but also his terrifying confessions. In one video, a detective describes how Dahmer explained that it takes about an hour to boil a human head. When Dahmer was finally arrested, police found the severed head of a 25-year-old victim sitting in Dahmer's refrigerator, along with two human hearts, a piece of arm muscle, a torso, and a bag of human organs. Elsewhere in the apartment, two skeletons, a pair of severed hands, two severed penises, a mummified scalp, and three torsos dissolving in a 57-gallon drum of acid solution were found.

You can catch more footage from the trial as well as interviews with Dahmer himself when Dahmer on Dahmer: A Serial Killer Speaks premieres on Oxygen Saturday, Nov. 11.