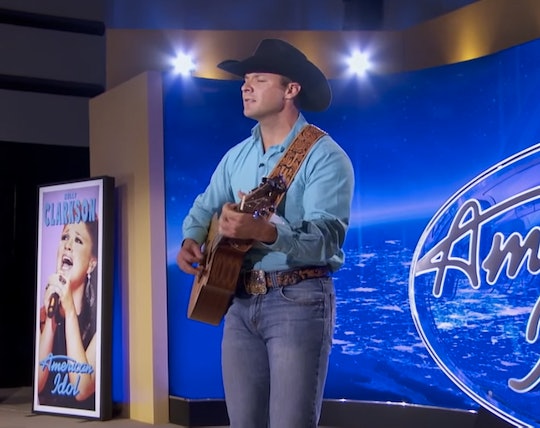 If John Wayne Shulz doesn't make you go "awwww," then you sort of have no heart. The Kansas singer wooed the judges — and viewers — with his perfect rendition of Keith Urban's song "John 3:16" on Wednesday's episode of American Idol. But videos of John Wayne Shulz singing will make you love the Idol contestant even more.

Shulz has been winning over fans since his he was kicked off of the show in season 10. One fan even tweeted on Wednesday that Shulz "could sing to [her] any day", since you know, it's not just that he's talented... he's also winning viewers over with his looks. (Another fan noted that he might be the only man who could take his hat off and look even hotter.) Right, it's bad to objectify people for their looks. But it's hard not to when they have the personality and the all-American boy looks of Shulz. I mean, the man is an actual cowboy.

Moving on. Although Shulz didn't make it to Idol's top 24 this year, you can still catch him crooning over on YouTube, if you know where to look. Yes, that means even if you weren't rooting for him on Idol, if you head to YouTube and look up all those incredible videos, I'll consider you absolved of your sins.

Shulz has an awesome fledgling music career of his own, despite not being able to snag the ultimate victory over on Fox's big reality show — and these clips of him performing his tunes will have you on Team Shulz in no time.

The cowboy thing works. But Shulz sounds just as good without that hat.

Fronting a band works for him. This could turn anyone into a country fan.

Last Time He Made It To Hollywood Week

In season 10, Shulz even got Jennifer Lopez to sing along to with a cover of Fleetwood Mac's famous "Landslide."

Shulz performed this song for his 2016 audition and then recorded a full length version. (You can buy it on iTunes, too, if you're really in love by this point....)

JLo was an early believer in Shulz after his first time on the show. "I believe that you believe," she told him.

One could easily disappear into a clickhole listening to Shulz croon on old Idol episodes or covering his own musical favorites. And no matter what happens to him going forward — whether he becomes an overnight sensation or otherwise — Shulz has his head on straight about what it all means. In a Facebook page post Wednesday night, Shulz wrote that he was just happy to be on stage "to share [his] music and connect" with fans. Really, what's not to like about this guy?