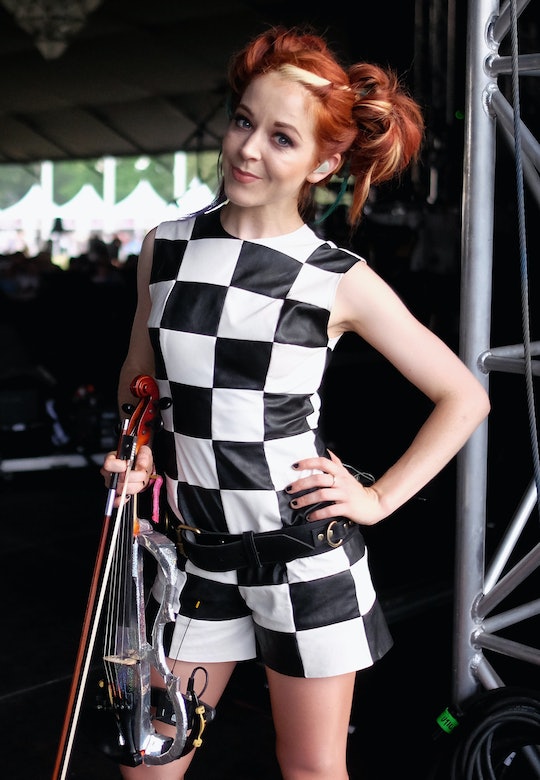 On Dancing with the Stars, there are always a couple of contestants that you can be pretty sure are going to kill it. Olympic gymnasts, for example, have a bit of a leg up. And nobody was surprised when Broadway star Jordan Fisher turned out to have rhythm. Other contestants are a little more surprising. In the name of research, I looked up some videos of Lindsey Stirling playing the violin, and they prove that this Dancing with the Stars contestant has got some serious talent.

If you were surprised that Stirling was doing so well in the competition, that is probably because you've never seen her on stage before. Have you ever watched a woman perform acrobatic leaps and turns while furiously playing the violin to a heavy dance beat looking exactly like what I imagine fairies must look like? If no, then I highly recommend you take a look at some of Stirling's performances on YouTube, proving that she might have a little more of an edge on the competition than I originally thought. I had never heard of her before Dancing with the Stars, but I am now frantically searching for Lindsey Stirling concerts in the near future because I have to see this for myself.

Silly me, I always sort of assumed that violinists have to stand more or less in one place in order to play so beautifully. That takes a lot of concentration and some subtle arm movements, doesn't it? Apparently not, as Stirling appears to defy gravity while performing.

In one performance, which, to be fair, appears to have been sponsored in some part by YouTube, Stirling credits the platform with her success. She said that when record labels and other traditional routes told her that she was just "too different" to be a credible artist, YouTube provided her with the tools to share her art the way that she wanted to share it. She finished her introduction by saying, "Being different is sometimes a good thing. Being different isn't something to be ashamed of." I have to agree. Stirling is definitely different, but that is what makes her so magical.

Stirling has also appeared on Conan O'Brien's show, which I somehow missed even with all the TV that I watch. Dancing with the Stars may be a slightly unorthodox way to get new music recommendations, but I have to say I'm glad it introduced me to Stirling.

Anyone who was familiar with Stirling's performance style would probably not be surprised to know that she is killing it on Dancing with the Stars, and I predict will be in the final three. At this point I can't tell whether I want her or Fisher to win most. But I am pretty confident that it will come down to the two of them — you heard it here first, folks.

From Week 1, Stirling has been one of the highest scoring contestants on the show. She and partner Mark Ballas earned straight nines for their dance on "Guilty Pleasures" week, then two nines and an eight (from notorious grouch Len Goodman) on the "Memorable Year" week, in which Stirling danced a routine in honor of her late father. Stirling clearly has the natural grace and certainly the energy to take her all the way to the top of the competition. If she can pirouette while playing the violin, she should have no problem pirouetting without one, right?

For extra style points, I really hope she dances with her violin at some point in the competition. Goodman can't take any points off for that, can he?