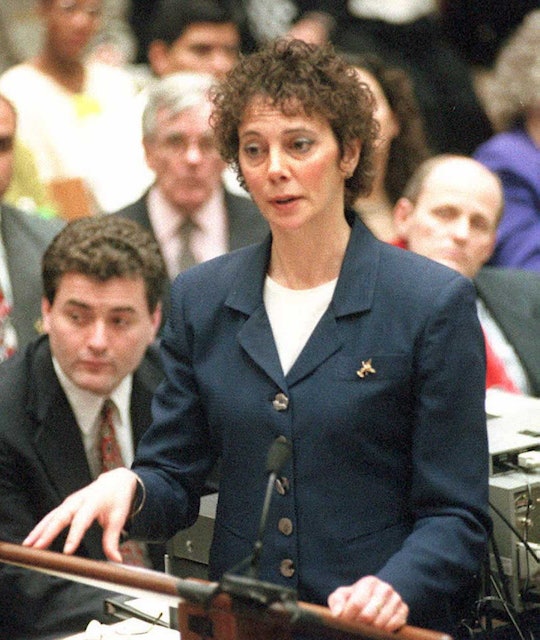 Videos Of Marcia Clark At The O.J. Simpson Trial Show She Wouldn't Back Down Despite Criticism

Audiences have been enthralled with the new FX drama, The People v. O.J. Simpson: American Crime Story. More captivating still is actress Sarah Paulson's commanding performance as Deputy District Attorney Marcia Clark, the lead prosecutor for the state of California's case against the legendary football player, O.J. Simpson. For those who remember the trial of the century that happened more than 20 years ago, Clark's no-nonsense approach — and uber-perm — are etched into their collective memories. As one of the most high-profile cases of the time, Simpson's trial received near non-stop media coverage. And now, many videos of Marcia Clark at O.J. Simpson's trial can be found across YouTube.

For fans of The People v. O.J. Simpson, Paulson's portrayal of Clark is a stellar performance in verisimilitude, but actual videos of Clark at Simpson's trial provide a more concrete context of the backdrop for the FX drama. At the time, Clark was called many things: hysterical, incompetent, unlikable, and, yes, even a bitch. But that was the '90s, right? In a piece for New York magazine's website The Cut, Rebecca Traister asserted that "with a push from the O.J. mini-series, the ’90s bogeywoman is set to become a feminist icon."

While The People v. O.J. Simpson takes some artistic license with the trial details, the courtroom videos showing Clark at her strongest don't lie. The then-40-year-old prosecutor already had 13 years of experience in the D.A.'s office. With the help of her equally-experienced co-counsel, Christopher Darden, Clark was laser-focused on her questioning of witnesses and experts for the prosecution. But, as the trial — and the increasing spectacle it had become – dragged on, Clark wasn't afraid to assert herself in the courtroom, as in this heated exchange with Simpson defense attorney F. Lee Bailey:

The next day, Clark and Bailey stood before the court to offer apologies to the court. Clark called the previous day's exchange "unseemly," calling it "bad for the entire profession," offering apologies directly to Bailey. She was careful to choose her words, but comes across as the much cooler, more level-headed professional than Bailey, who, at no point during his own apology, actually directs his apology toward Clark herself.

During the prosecution's closing arguments for the trial, Clark takes on a far more compassionate role, both acknowledging and thanking the jury for the immense commitment and sacrifice they'd made by being involved in such a long, drawn out trial:

With unprecedented media attention, there are plenty of more videos of Clark's determined performance in the courtroom to be found online: In his 2004 book on the Simpson case, America on Trial: Inside the Legal Battles that Transformed Our Nation, Alan Dershowitz wrote the trial was covered “in 2,237 news segments from 1994 through 1997.” As much as The People v. O.J. Simpson intends to show viewers the "real" story of the Simpson trial, it doesn't hurt to go back to the source material for the most realism.