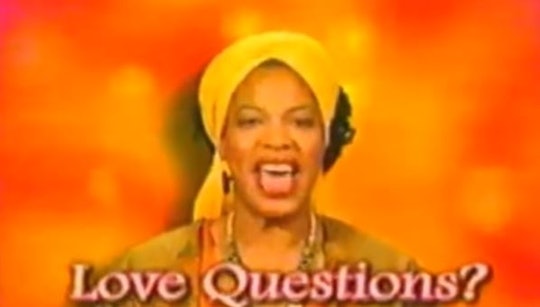 Anyone who stayed up late to watch TV in the late '90s and early 2000s surely remembers Miss Cleo, the Jamaican-accented psychic who called on bleary-eyed viewers to "Call me now!" According to TMZ, Miss Cleo, whose real name is Youree Harris, died Tuesday morning from cancer. She was just 53 years old. So in honor of Harris, here are videos of Miss Cleo's commercials that became late-night staples.

According to TMZ, a representative of Harris said she died in Palm Beach County, Florida. Harris, most well known for her character Miss Cleo, was actually born in Los Angeles, but just did a really good Jamaican accent.

Just last summer, according to the New York Daily News, Harris was sued by the Psychic Readers Network for resurrecting her Miss Cleo character for a French Toast Crunch commercial. Psychic Readers Network told the Associated Press it paid more than $100 million to build the Miss Cleo brand, according to the Daily News. That number doesn't really sound high, considering how often those commercials played on late-night TV.

The Psychic Readers Network ultimately had to waive $500 million in unpaid phone bills from people who called in to get their fortunes told by Miss Cleo, the New York Daily News reported.

According to The Week, the Federal Trade Commission ruled against Miss Cleo and her Psychic Readers Network because, although her famous advertisements, which played steadily on TV, offered what she said were "free" readings, they actually weren't free. There were hidden fees for those "free" fortunes.

But Harris maintained she was just an employee of the PRN and was subsequently dropped from pending lawsuits, The Week reported.

Miss Cleo, with her incense, candles, and head wraps somehow got people to open up about their deepest desires and darkest fears and offered advice that seemed to indicate she really did know something the rest of us were missing. Whether it was figuring out the father of someone's baby, future business prospects, or whether their partner would ever stop cheating, Miss Cleo really did seem to have all the answers.

After her time as Miss Cleo, Harris did voice work on "Grand Theft Auto: Vice City," and was a central figure in a 2014 documentary Hotline about the changing role of the telephone hotline industry, according to Vice. Harris also came out in the Advocate in 2006, Vice reported. She told Vice she was making about 24 cents per minute as a phone psychic.

Here are some of the best Miss Cleo videos to honor Harris' most famous character.

The Stupid Young One Or The Married One?

On The Jenny Jones Show

On Someone Who's Married