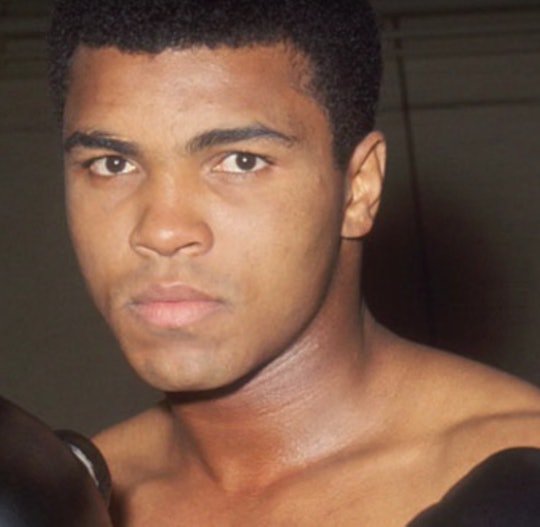 The heavyweight champion was the self-proclaimed "greatest" of all time, wowing fans and opponents alike with his agility and power in the ring. When Muhammad Ali died Friday that age of 74, President Obama equated him with iconic civil rights leaders Martin Luther King, Jr., and Nelson Mandela, two men that Ali respected and admired in life himself. Ali notoriously advocated nonviolence, refusing to fight in the Vietnam War and losing his boxing license and much of his peers' respect in the process. He spoke out forcefully against religious prejudice, having converted to Islam as an adult. With his prolific, nearly lifelong tenure as an activist and global humanitarian, it's easy to forget that Ali first entered the limelight as a world-class boxer of unprecedented talent and strength, and these videos of Muhammad Ali boxing will remind you exactly why he was "The Greatest."

Drew “Bundini” Brown, one of Ali's assistants, once said that Ali would would "float like a butterfly, sting like a bee" in the ring, and Sports Illustrated's Richard Hoffer characterized his presence in the ring as "a kind of jazz, fully improvisational, performed to the whimsical score in his head." His fights and storied rivalries against opponents like George Foreman and Joe Frazier enthralled the nation. Ali was as graceful and powerful in the ring as he was entertaining, and even after he dealt with a debilitating Parkinson's disease before his death from septic shock, videos of the man fighting in his prime immortalize him as the champion he once was — and as the inspiration and American legend he will always remain.

1974's "Rumble in the Jungle" was billed as "the fight of the century" at the time, and culminated in Ali's epic takedown of George Foreman in the capital of what is now known as the Democratic Republic of Congo. Ali himself was Congolese, according to Reuters, while his opponent, who was also black, nevertheless represented the white establishment for many. Members of the crowd of more than 60,000 people chanted "Ali, kill him!" in the local language, and Ali, did win, as well provided maximum entertainment value.

Although Ali insulted challenger Joe Frazier for weeks before the fight — even calling him a "gorilla", a jab he later rescinded — he praised him as a lion after defeating him. Following the fight, Frazier had blood-stained lips and a puffed-up eye. He was injured to the extent that his own manager would not let him return to compete in the fifteenth and final round. Ali, by contrast, had blown kisses to his friends between rounds.

Although Ali was an undisputed champion in a sport many revile as unnecessarily violent and outright dangerous, Ali's moves often resembled those of a dancer as he gracefully led opponents around the ring. Even those without much knowledge about the sport and its intricacies can appreciate Ali's confidence and swagger. He exudes an effortlessness borne from only the rarest talents.

In April 1977, when he was 35, Ali successfully dodged 21 punches from his 19-year-old competitor, Michael Dokes, and he did it in ten seconds flat. It's honestly insane to watch, and then Ali capped it all of with what the Huffington Post called a "delightfully taunting wiggle dance." You honestly have to see it to believe it.

Before Ali changed his name when he converted to Islam — a radical move for an athlete at the time — he was a "rising phenom" named Cassius Clay. He squared off against Doug Jones in 1963 at New York City's Madison Square Garden. Ali come out on top, but Jones made him pay, according to Bleacher Report, something very few opponents managed to do over the course of his career. This instance is particularly notable because it showcases not only Ali's skill and finesse, but also just how much he grew as a boxer over the course of his career.

Ali and Frazier matched up on three occasions between 1971 and 1975, and Newsday called theirs the greatest rivalry of individual human combat of all time, with the possible exception of David and Goliath. Their trilogy ended in the Thrilla in Manila fight of 1975, and before that the two traded blows consistently, and Ali shows his fortitude and in this highlight reel.

Because the guy is simply the greatest of all time (or the GOAT, as teens say these days), and what shows that better than a compilation of him dominating challengers over and over and over again?

Ali will be remembered for so many reasons beyond his boxing career, but in reality, his success in the ring was what launched him to stardom and granted him the the platform to champion all the other causes he believed in over the course of his life. Muhammad Ali will always have our respect as a sportsman, and he'll always have our hearts as a humanitarian, too.