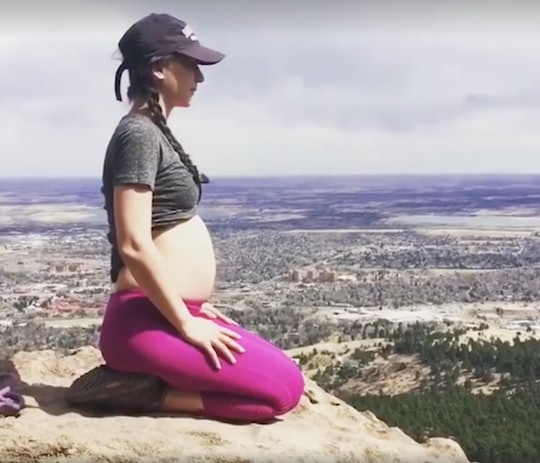 I Love Being a Mom/Facebook

Housing another human being inside of your own body for up to nine months is a pretty cool concept, if you think about it. But here's one that's even cooler: Noticeably, undeniably pregnant women creating the illusion that they're no no longer expecting at all — right before your eyes. That's what's going on in a series of videos of pregnant women making their bumps disappear that are, understandably freaking some people out. But, as surprising as this trick might seem, it's actually part of an exercise method meant to increase pelvic and abdominal strength to prepare moms for labor and set them up for physical success beyond childbirth, too.

"The Belly Pump" is one of the signature exercises of the Boulder, Colorado-based program that aims to help moms remain active throughout their pregnancies, The Bloom Method. Founded by Pregnancy and Post Birth Exercise Specialist Brooke Cates, The Bloom Method offers a suite of prenatal and postpartum fitness classes, online and personal training, and other education — but it's The Belly Pump that's taking the internet by storm and (probably) compelling even the most seasoned of moms to do a double take.

Take, for example, this CafeMom video of women using it to make their pregnant bellies into seemingly baby-free ones in no time. If I didn't know better, I'd be 100 percent sure that we had a hoax on our hands.

Some Facebook viewers are similarly perplexed. "This is so creepy!" one joked. "Just watching this made my baby start kicking!"

Another had a more critical response: "Too creepy It's not healthy for the baby," they wrote. "It's not amusing at all."

In an interview with Babble, however, Cates explained that the exercise is completely safe for the baby, as he or she just travels back up into the woman's ribcage during the "core activation." Women in Bloom Method classes learn to breathe from their diaphragms instead of their chests (which helps them to de-stress), before they move on to pumping for deep core engagement. That's when the mind-bending portion of the whole enterprise begins, with moms learning to activate their transverse abdominal muscles to create "a contraction between the pelvic floor and deep core muscles" which "lifts and activates the pelvic floor," Babble's Chaunie Brusie wrote.

Cates claims that the women she works with will push for only 20 to 30 minutes during labor thanks to her method. In an Instagram post, she also listed some of the benefits of The Belly Pump, including a decrease in low back and pelvis pain, teaching women to push effectively during labor, and aiding in postpartum healing.

It's important to note that Cates is not a physician, so it's a good idea for women to check with their doctors before starting on any new pregnancy exercise routines, even those that seem safe. In the meantime, sit back with the rest of us and marvel at how amazing pregnant women really are — because this video proves that they must have some sort of eerie magical powers. Right?