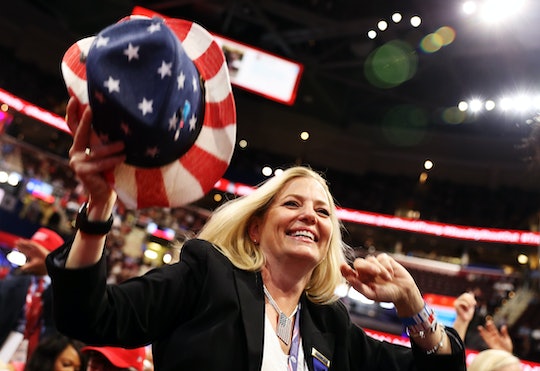 Watching the Republican National Convention starts to get tough after a while. Trying to make sense of the speeches and the controversies about who will endorse whom and who wrote what speech... it's exhausting. So is listening, on both sides, to the reactions to the policies. It's stressful. Luckily, social media has a treasure trove of videos of RNC attendees dancing that will make you feel better, at least for a little while.

In between all of the political rhetoric, the RNC house band — led by G.E. Smith, the former bandleader for Saturday Night Live — is playing covers of every top 40 song ever written. The delegates are dancing like no one is watching, when in fact, everyone is watching. Sometimes on cable news you can't hear the music and it looks like they're just flailing around, but if you flip to CSPAN you can hear every last beat.

Think "Sweet Caroline," or "My Sharona." It's like being at a bad wedding or a T.G.I. Fridays. It's everything you need to see if you're not into politics or are starting to get a little nervous about the election. And listen, I don't like stereotypes or judging people, but this convention is pretty, well, white. There are a lot of white people coming out for Republican nominee Donald Trump and there is, in fact, a reason people joke that white people can't dance. Because most, myself included, cannot.

If you need any proof, please watch these delegates jamming out. Do it for me. Do it for your country:

Don't you feel better already? There is nothing better than a bunch of people dancing like they just don't care to bad (and great) tunes. It's a good mix, too, a little Bruce Springsteen (which I'm not sure he'd be totally OK with but let's roll with it) a little country I don't know anything about, and rock like AC/DC. It's like riding in the car with your parents. They even played Rush.

Sometimes it gets a little weird like on Monday when they performed a cover of David Bowie's Station to Station, which is a song that has a line about cocaine in the chorus that the band didn't censor. It goes, "it's not the side-effects of the cocaine. I'm thinking that it must be love. It's too late to be grateful." That's a weird song for delegates to listen to, but they did all the same.

Because they're having too much fun not to. Who cares about the nominees? I'm ready to take votes during the Democratic Convention next week about who can rock out better. I hope the event planners get a good band.

More Like This
What Exactly Are Minions, Anyway ?
Family Of Grandfather Killed In Highland Park Mass Shooting Say He "Saved" Their Lives
Megan Fox Explains Why She Asked Machine Gun Kelly If He Was Breastfed As A Baby
Prince Charles Got All Mushy When He Met Lilibet For The First Time