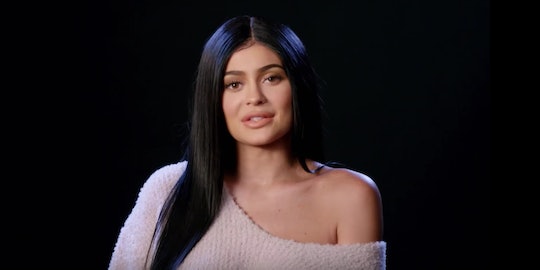 By now, it's a widely known fact that 20-year-old social media icon, makeup mogul, and reality star Kylie Jenner is a mom of one to her daughter, Stormi Webster, with boyfriend, Travis Scott. But if you told me this one year ago, I wouldn't have believed you. A lot can change in a year, and it is clear that Jenner's priorities have fully shifted to spending time with her daughter. This could not be more prevalent in the videos of Stormi posted to Jenner's social media accounts, which show that Jenner could not be more at peace or satisfied with her new life as a new mom.

Jenner pretty much took a massive break from social media during her pregnancy, where she refused to confirm that she was expecting a child or post any photos of her bump (understandably) for the sake of her health and her baby's health, according to Mirror. Jenner made her big return to Instagram during the first week of February, when she announced that she had, indeed, been pregnant and her baby had been born a few days earlier.

Since then, Jenner has been posting photos and videos of her daughter to her Instagram and Snapchat accounts and fans really can not get enough of the baby girl. Sure, the videos of Stormi don't show much (the baby can't really talk, after all), but they're still exciting nonetheless.

But what the videos do show is Stormi in motion, showing that the baby is definitely real (in case haters had any doubts) and that she might just be one of the cutest celebrity babies around. Not only this, but the videos that Jenner posts of Stormi to her social media accounts show the baby's growth. With fans being so far out of the loop during Jenner's pregnancy, this is a great way for them to connect to Jenner and follow along with Stormi's life. It brings back that connection to Jenner and her social media than fans really lacked for so long. There really aren't enough photos or videos that Jenner can post of Stormi because it's hard to not fall in love with her big eyes and sweet chubby cheeks.

The only problem with Jenner posting these videos on her Instagram story or Snapchat story is the fact that they disappear so fast. Thankfully, fans on Twitter have saved those videos so people can enjoy them for as long as possible, even after they get deleted on Instagram and Snapchat.

Like the time when when Jenner posted the most adorable videos of Stormi and her father on Snapchat on Easter, according to Teen Vogue, where people got to see Stormi stare adoringly into the eyes of her dad (and get a glimpse of the bond they share).

Or the time when Jenner posted the first video of Stormi ever to Snapchat in March, where she looked so adorable and fans got to see her face up close and personal for the first time.

Sure, the videos are adorable and show just how much Jenner's little girl resembles her mom and dad. But the videos hold a deeper meaning to mega fans of Jenner. Really, the best part about Jenner posting these videos of Stormi to her social media accounts means that there are more videos like these to come — especially since Stormi is only three months old, according to Elle. And this means that people will get to see Stormi grow up on social media right before their eyes. After Jenner took a short hiatus, that really felt like such a long time, any activity on social media is more than welcome. And these videos of Stormi are the most ideal thing that Jenner could post.