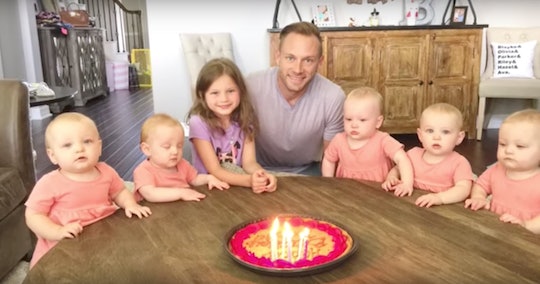 The Cutest Videos Of The Busby Quintuplets

There are about three things guaranteed to make the world seem less glum, improve your day, and basically make everything seem better, no matter what's going on in your life: puppies, chocolate, and little kids. And five little babies at the same time? That's five times the amount of cuteness, and even more distracting. Enter the Busby family of OutDaughtered fame, or, more specifically, these videos of the Busby quintuplets that are a perfect distraction from everything wrong in the world.

The TLC hit OutDaughtered first made it's way onto television screens across America back in 2016, although the first season only included four episodes. However, its second season was an even bigger hit and included a total of 12 episodes, taking viewers into the lives of all the Busbys and the chaos that inevitably followed.

But the Busby quints, who are all 2 years old now, first shocked the world —and their parents — way back in 2015 when they were first born (they were the first all-female set of quintuplets, for the record). Since then, the babies have been the stars of OutDaughtered, alongside parents Danielle and Adam, and big sister Blayke, who's 6. Their show is equal parts adorable and silly, and the Busby family has proven themselves to be worthy of a reality series with their honesty and humor.

So, settle on in and relax. The Busby quints — Ava, Olivia, Hazel, Riley, and Parker — are here to make you day.

Now in its third season, OutDaughtered has shown the world that having quints is both as exciting, and exhausting as any other busy family dynamic... just, you know, times five.

But seriously, how cute are they? Whether they're playing, sleeping, or just sitting down, the Busby quints are definitely worthy of all the attention they get. I mean, have you ever seen anyone assemble together to head outside in a more adorable fashion? I highly doubt it:

And while some may think that being a mom to quintuplets would be an impossible task, Danielle Busby is a pro: She takes it all one day at a time. In an interview with Style Blueprint, the mom of six and small business owner said,

Well then it turned out that we’re having our large family all at one time, so I kind of take it as God’s humor. Infertility is hard, and we were well-prepared for the journey we were going to take until God was like here you go! I laughed about it.

Seriously, any parent who can wrangle six kids at a time? They're doing something right, and Danielle seems to not only have it all on lock, she's got a sense of humor to deal with the bad days as well.

Keep on keepin' on, Busby family! Your videos are the perfect pick-me-up.