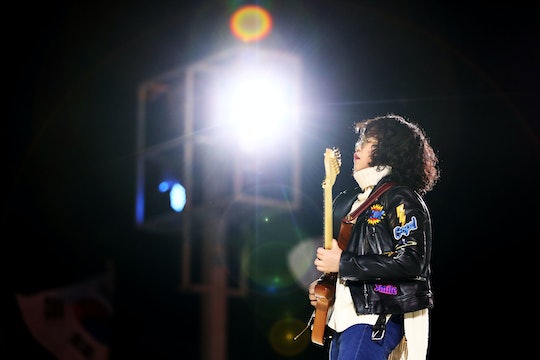 Oddly enough, it wasn't sports that had everyone talking at the closing ceremony of the 2018 Winter Games. It was a 13-year-old guitarist who shredded the classical tune, "The Four Seasons" by Antonio Vivaldi, of all things. But that's not all he can play, as videos of Yang Tae-Hwan on YouTube show — he can also do a wide array of classic rock tunes.

But the closing ceremony was really quite the spectacle. Yang played the guitar while drones all flew around the stadium. Then, according to NPR, "loop dancers perform a mesmerizing dance that defies gravity. Geomungo players perform together with the band Jambinai. Korean dancers present a modern interpretation of a traditional dance while a solo dancer performs Spring Dance of Nightingale."

It was a really meaningful ceremony and every little aspect was thought through. Yang was discovered on a popular television show called Star King, according to Elise Hu, a reporter for NPR who was live-tweeting the ceremony. He's also from the Gangwon province, which is where the games were hosted. See? There was meaning in everything.

On Twitter, people were loving the kid for both his talent at playing the guitar and the fact that he looked so cool doing it. Here are some more videos of him doing his thing.

Playing "The Sultans Of Swing"

Playing "House of the Rising Sun"

Jamming With His Sister

Unlike the opening ceremony, which is a celebration of all the different countries and athleticism to come, the closing ceremony is traditionally meant to honor the host country and welcome the next city taking the Olympics. By that standard, the PyeongChang closing ceremony was a huge success. It was the first host city ever to build a stadium just for the opening and closing ceremonies. This one in particular was open air and able to hold about 35,000 people. So young Yang had quite the crowd to please.

Oh Jang-hwan, director of ceremonies for the PyeongChang 2018 organizing committee told Olympics.org that the theme for the closing ceremony was "Next Wave," so having young kids play and take center stage drove that point home, explaining:

It will have a festival atmosphere to recognize and celebrate the athletes’ hard work and achievements at the Games. We have created a show that looks towards the future; it includes quite a lot of traditional Korean humor and fun elements to add to the party feel.

Judging by the reactions on Twitter, they really pulled that off with all of the young musicians and dancers. Aside from the festivities, the closing ceremony got a little bit political, too. Unlike Vice President Mike Pence, who didn't stand up for North Korea at the opening ceremony, Ivanka Trump, who was there representing the United States at the games, did in fact stand up and clap for the country's athletes.

There was other drama leading up to the closing ceremony, too. According to Vox, Russia reportedly hacked into a slew of official Olympic computer systems and attempted to make it look like North Korea did it, allegedly trying to start some political drama. People were unable to print their tickets or look things up, which is possibly why you might have seen some empty seats. It's plausible that Russia might have been acting out since the International Olympic Committee suspended the country from participating in the games this year and even walking in the closing ceremony, due to a doping scandal, as The New York Times reported.

Luckily, there was no hint of any of all that negative energy during the actual celebrations and performances, which is just as it should be. South Korea really threw a pretty good Winter Games and they definitely picked the right kid to give them a proper send off.