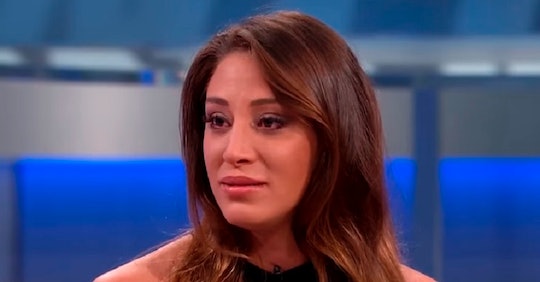 Over the summer, former Bachelor star Vienna Girardi revealed the tragic news that she lost her twin daughters when she was just 18 weeks pregnant. Since then, she's seldomly spoken about her devastating loss, but in a truly heartbreaking post on Facebook yesterday, Girardi paid tribute to her twins she lost to miscarriage on what was originally their due date. "Today should have been a day to rejoice and celebrate life... today was my due date. Instead I’m finding it hard to even get out of bed, hard to smile or feel anything at all," she wrote in the post. "I feel numb as I stand outside watching my dogs; it’s wet and gloomy as if the world knows and feels my pain."

In her tribute to her twins, Girardi went on to say that time has helped to make her heartbreak manageable, but she continues to feel sad and emotional over her loss. She said that she still becomes "angry" and wonders why her twins' lives were taken. "I’m mad and sad and just want it to be ok to feel this way," she wrote. When Girardi first revealed her devastating miscarriage news, she explained her doctors discovered her twins were suffering from TTTS (Twin to Twin Transfusion Syndrome).

According to the Twin to Twin Transfusion Syndrome Foundation, this illness affects identical twin pregnancies and it's a disease of the placenta that can result in unequal distribution of necessary nutrients to both twins. One of the effects of the disease is heart failure in the fetuses. Girardi previously told Us Weekly, just days before the miscarriages, that her babies shared a placenta and they were monochorionic diamniotic. She also talked about the fact that she was a high-risk pregnancy and the risks her babies were facing. "They share a placenta, which means they also share nutrients," she told Us Weekly. "One baby can potentially take more from the other, so I have monitoring every two weeks. The moment doctors see one growing bigger, there’s a surgery they can do."

In Girardi's announcement about her miscarriages, she wrote these devastating words on Facebook:

This is the hardest thing I have ever had to write ... My little angels went to Heaven on Aug 5th and I was rushed into the OR for emergency surgery and was in the ICU for 4 days. I don't know why this happened and I pray the Lord gives me strength to understand why he needed my little girls.

The former reality star also discussed her heartbreaking account of her miscarriages in an appearance on The Doctors just a couple months ago.

It was in 2010 that Girardi was thrust into the spotlight as a contestant on Jake Pavelka's season of The Bachelor, but her tragedy has shown her in a whole new light that's resonated with many of her fans and women who have gone through what she's dealing with right now. Fortunately, according to People, Girardi's doctors told her she should be able to have children in the future if she decides to.

It may seem like the grief and heartbreak is too overwhelming to bear, but Girardi's tribute to her twins is likely helping her cope with hers. For example, Dr. Eve Agee, a women's empowerment expert, suggested to Your Tango that several ways to help cope after dealing with miscarriages include journaling your feelings, seeking professional help, and commemorating your loss with some kind of personal shrine or tribute.

Indeed, suffering a miscarriage can feel like an impossible loss to overcome and Girardi's openness and honesty is undoubtedly helping countless mothers heal from their own tragedies and feel less alone during an immeasurably hard time.