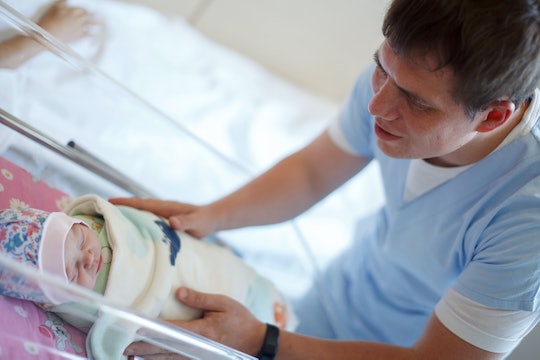 Sorry, Nothing Can Actually Prepare You For Watching Your Partner Give Birth

Every couple’s story through labor to delivery is unique. While some birthing journeys seem to go by flawlessly, others are more difficult and stress-filled. Many mothers are thankful for the support of their partners during their labors, even if it’s only holding their hand and encouraging them through each push.

Rob and his wife, Annie, married in 2008 before welcoming their first child, Abbey, into the world about seven years ago. The New Jersey-based couple had no idea what was in-store for their first delivery experience.

"She was basically up all night having [sporadic] contractions. But again, we were first-time parents so we had no idea what all of this meant and we were just doing what they told us.

"We stayed in bed till about 6 a.m. and then we called the doctor and the doctor said, ‘Well, it could be false labor, but why don’t you go to the hospital just to make sure?’ And that’s when Annie stood up to get herself together — they tell you to pack a bag and be ready to go just in case — and the second she stood up she was like, ‘No, now! It’s happening now! Go, go!’

"We got to the garage and had to get our car down. Our car used to be in this weird garage carousel and we had to wait for the car to come and I just remember she was losing it. And there were other people coming in to get their car to go to work and stuff and we were like, ‘No, we are going!’ We were jumping in front of everybody. I think it was about a half an hour drive to the hospital and I had my head out the window like, ‘Move! Move!’ — it was just like in the movies.

"We went inside and they measured her and told us we were fully dilated and about to have this baby. They rushed us upstairs and we went into the room and I said to the doctor, ‘Listen, I parked in a handicap spot. Should I go move the car?’ And he said, ‘By the time you move the car you’re going to have a baby in five minutes.’ Which is like the weirdest sentence you’ll hear in your life; in five minutes your entire world is about to change.

They put Annie on the table-thing and three pushes later, there was Abbey.

"You’re on a rollercoaster. You’re just going and doing what they say, because it’s not only about the lack of five minutes: no matter how much prep work you did — and Annie read books and we took classes and stuff like that and I handled babies from my nephews and stuff — no matter the experience you have, the process of giving birth, there’s nothing else like it in the world.

"They put Annie on the table-thing and three pushes later, there was Abbey. It was so fast and it was so chaotic, and Abbey came out and I took her, and I cut the cord, and it was so freaking overwhelming. It was like nothing you’ve ever experienced before in your life. It’s just the weirdest thing ever. There was so much going on and it was so chaotic that I was just feeling a hundred different things at once."

Jon and his wife have been married for about four years and last September welcomed their first daughter together. He recalls the terrifying feeling that came over him when the Virginia-based couple was told that an emergency c-section would need to be performed.

"The night before we went to the hospital, my wife started to have contractions. That next morning we went in and saw her doctor and he told us that this was it so we had to head to the hospital.

"I think every parent will tell you they had a plan for how they were going to deliver, and I don’t know what it was like for anyone else, but that plan went right out the door for us.

"We got to the hospital and checked her in and we kind of just waited around that day. She just kind of labored the entire night. The perspective of the dad [during this time] is the most helpless feeling. There was literally nothing I could do. I’m watching her go through this life-changing ordeal.

"She labored for a total of almost 40 hours. The whole time, it was kind of surreal. It was very humbling because there’s literally nothing the dad can do. You want nothing more than to be able to take her pain away and progress things along and get her and the baby girl through anything without any issues.

It was absolutely terrifying. It was the longest and most surreal night of my life.

"We got to the point where [she was ready to push] but we couldn’t have her naturally because, basically, the baby girl’s head was too big; she just couldn’t come down. And so, in the middle of the night, we had to go back for an emergency c-section after my wife had been in labor for going on 40 hours at that point. That was terrifying. It was absolutely terrifying. It was the longest and most surreal night of my life.

"It was incredibly difficult. She was tired, obviously, from two days of labor and the baby was tired. There was a couple of times throughout the labor process where her heart rate had dropped. I was at the head of the bed holding her hand literally trying to keep my wife awake and conscious... You kind of just have to put your faith in the people that you’re working with. They got the baby girl out and she wasn't doing well; she wasn’t breathing very well on her own. So they ended up having to put a little tube in her throat and she ended up having to stay a couple of days. But she did very well when she was there and she came off of any breathing assistance pretty much the first day and she just powered through after that.

"It was the happiest moment of my life but it was also the most terrifying. I come from a medical background so I knew all the things they were saying and they said the word ‘incubate’ which means to put a tube in someone’s throat and I almost lost it.

"[Once my wife gave birth], it was an incredible feeling because, like I said, it was the happiest moment of my life to turn around and see her. We did that and she’s alive and with us and she’s actually crawling around the floor right now playing with the dog bowl."

More Like This
Pitocin Induction: What It Is & The Play-By-Play
This Is How Your Water Breaks During A C-Section
21 Earthy Baby Girl Names For Your Little Force Of Nature
20 Perfectly Proper Tudor Baby Names