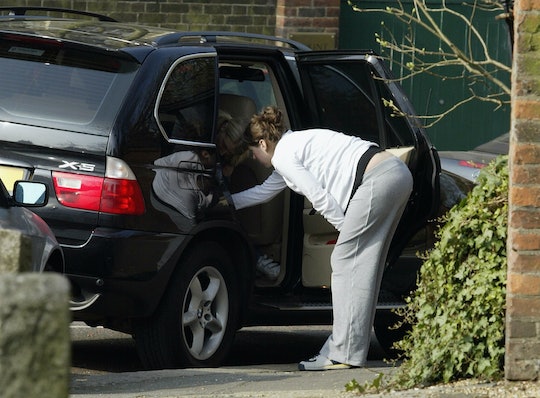 When The Person In Your Backseat Is About To Give Birth

If I yelled too much, I'm sorry. I had told my husband to call an Uber shortly after I passed into active labor halfway down my block. I reached our front door, heaving, and dragged myself upstairs to grab the go bag. "We need. To go." I winced. That's when I heard the "pshhhhhh" of the shower sprinkling down over our dove blue bathtub. Who is to say whether my husband's last-minute shower cut into the less than 20 minutes we spent at the hospital, from curb to "WE SHALL CALL HIM JAPHY"? What I do know is that the lucky fellow who pulled up at our Brooklyn address in his black Ford Escalade handled himself admirably down Flatbush Avenue and over the Brooklyn Bridge in heavy traffic, preventing what could quite easily have been a "News @ 9" clip of a traffic cop delivering a baby in midday congestion.

Which, by the way, happens more often than you think. The rise of the gig economy has inadvertently filled a shortfall in maternity care — beds are short in delivery wards, and women often advised to labor at home for as long as possible, leaving them and their Uber drivers to chance it as contractions go from six minutes apart to two, if you're me. What is it like to be in the front seat of a stranger's labor? Romper spoke with Raymond Telles, 25, an Uber driver who, at 23, helped deliver his client Erica Davidovich's baby in the parking lot of a Sherman Oaks, California, Whole Foods. Here's what went down.

"It was my last drive of the day and when I was pulling up at the house: she is outside already and she has her hands on her knees and you can see something is wrong. She's taking deep breaths and I get out of my car to open the door for her and her husband comes running out, and I'm like, 'Oh my gosh, what's going on.'

She was in the back seat, he was right next to her and the baby just fell out.

"So her husband runs out, gets in the car, I go on the other side, I get inside start the trip to the hospital and she's just yelling at her husband like crazy. I start driving and all of a sudden she said her water broke, like out of nowhere, it was at a light. I was trying to rush but I didn't want to put her safety in danger, so I just pulled over at that point and I had to call the paramedics, and told them the location. And as they were coming over, she had the baby in the car. It was only a minute from her water breaking to having the baby.

"Her husband and I helped with the birth, which is really crazy. I'm thinking about it right now and it's still blowing my mind what happened. She was in the back seat, he was right next to her and the baby just fell out. [Helping was] just catching it, trying to make sure it didn't hit its head or anything. It came out flying. It didn't come out slow.

"She was just holding the baby and the paramedics showed up quickly, it was like 30 seconds. I think she's had three [other babies] and she said all her labors were 12, 13 hours, so that's why she was super surprised, because all of her labors were so long and that was a minute or two.

"The paramedics took over from there. they put her on the stretcher and yeah they took over the whole rest of the way.

"I got in contact with her later. The husband got my number before he left and we talked, I actually went to this thing where they do the circumcision at the church, like a whole celebration that they do, and they invited me and I went. And yeah, I'd help out again."

Erica and her husband Niv's baby was born a health 6 pounds, 12.5 ounces, and transferred to Saint Joseph Medical Center in Burbank after the Los Angeles Fire Department arrived on scene. Raymond happened to have a big towel in the back of the car that the baby was wrapped in once born.

He still drives for Uber.

More Like This
Home Reno Culture Makes Me Feel Like I Live In A "Before" House
I’m Getting Dual Citizenship For My Jewish Children, Just In Case.
I Finally Tried Toy Rotation — & OMG, It Actually Works
The Cutest Petite Maternity Clothes From Amazon Under $40