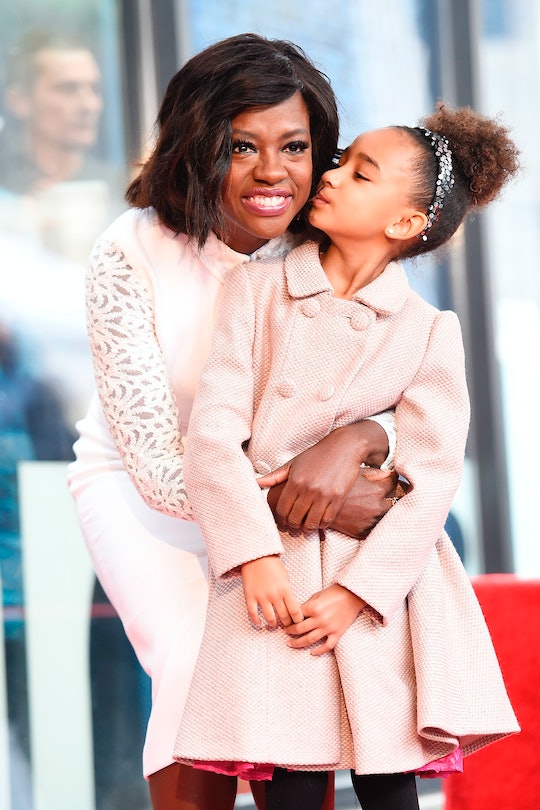 Viola Davis' 6-year-old daughter Genesis Tennon has been featured on the star's Instagram sporting all kinds of adorable outfits. Whereas Genesis can be whomever she wants, her mom has one specific guideline where costumes are concerned. Viola Davis's dress up rule for her daughter is pretty special, and it shows that the award-winning actress definitely has her girl's best interests at heart.

For starters, every Disney character is on the table. Regardless of the actual skirt, boots, or jumpsuit donned, Davis encourages Genesis to look like her own version of the role model or the character. "I really push it," Viola told Yahoo Style. "I say, ‘You gotta wear your hair exactly the way it is. You can be Wonder Woman, but you gotta be Wonder Woman with your hair. You can be Elsa, but you gotta be Elsa with your hair.'" The reason why? "You can do all of that stuff if you start with the palette of loving who you are," Davis recalled telling her daughter to Yahoo Style.

The two have put this standard into practice. Back in June, Davis posted a throwback of a 2- or 3-year-old Genesis in a Wonder Woman costume, shiny cape, headband, and all (Davis was helping to celebrate this year's premiere of the Wonder Woman film). In the Instagram photo, Genesis' hair is beautiful and natural; "She wanted to keep her fro," Davis captioned. Fans sounded off in the comments, applauding the look, hair included.

Genesis is a pretty wise chick and her mother has instilled a strong sense of self worth and self love. In an Instagram from this July, Davis quoted her kid giving a motivational speech of her own, informing her: "Mommy, you have your life. And if someone tries to put their life in your life, tell them 'Get out!' Then make your choice. They do not have the passcode." Honestly, I would like this printed out and framed right next to my mirror to start my morning affirmations with, please and thank you.

Mom knows best. Davis' hair journey has been a gorgeous thing to behold, and she's rocked everything, from sleek bobs to soft waves to — of course — her natural hair. Over the years, she's had to deal with some blatant hair ignorance, however.

In 2016, she she shared on an episode of The Late Show With Stephen Colbert: "I was doing a movie and I was doing it with my 'fro... this Caucasian woman had her fingers in my hair ... She said, ‘I’m going to make it really pretty,’ and so she put some white goo in it." The "goo" Davis told Colbert, did not agree with her.

"And then," Davis continued, "she took a big spray bottle filled with water and just started spraying my 'fro with the goo in the hair." Davis wanted to object; “And I wanted to say, ‘It’s not going to work,’ but I knew if I said it I would be insulting her. So I went to the set and slowly the sun caught my hair and my whole 'fro turned white." Davis said that she kept her mouth shut at the time, but vowed to educate others a bit later on.

In addition to instilling pride within her daughter's natural look, Davis' defense of healthy hair is likely influenced by her experience dealing with alopecia. When she was 28 years old, Davis lost most of her hair, and it affected her sense of self. "I have spent so much of my life not feeling comfortable in my skin," she shared with Vulture, highlighting: "I am just so not there anymore."

Davis' wisdom and self-love is infectious. Genesis can dress up as any part or role that she pleases, but she doesn't need to change herself in any way. How kind, smart, and important is that?