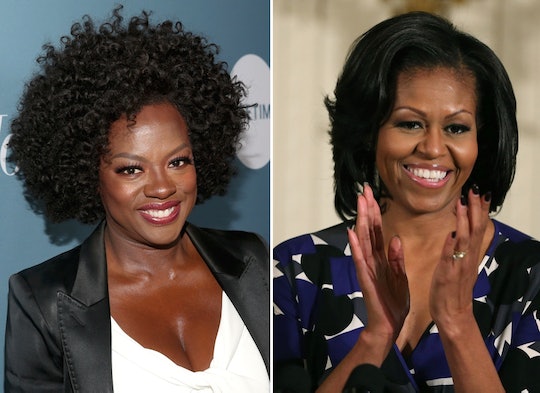 As a nation, Americans are living in a politically polarizing time, an issue that's only intensifying as the 2020 presidential election draws closer. However, for all the attention that sitting presidents receive, a fair amount should also be extended to those in their most immediate circle, who are perhaps more influential than some recognize initially. And Showtime's new political series First Ladies, starring Viola Davis as Michelle Obama, aims to do just that as it will focus on the lives of former presidents' wives and the iconic legacies they left in the White House.

Davis' production company recently received the green light for a season of First Ladies, which will focus on the complexities and personal/political lives of some of the most famous First Ladies in history, according to CNN. Davis herself will be on screen portraying Obama, who was in the White House with her husband President Barack Obama from 2008 to 2016. The series will also focus on Eleanor Roosevelt as well as Betty Ford, according to The Guardian.

Aside from the most obvious fact, which is that they look strikingly similar, Davis and Obama actually do know each other in person. According to the BBC, Obama met Davis on numerous occasions, and in 2017, Davis posted a photo of the two of them together on Facebook, writing to her friend: "May you continue to shine your light and impact future generations to come." Little did she know then, she would likely have a hand in extending that legacy even more.

On Instagram, Davis shared Deadline's coverage of the news, sharing that she felt "proud" to be spotlighting such significant women in history. Fans and followers were immediately excited by her new role, too. "Yooooo! I loooooooove this. A legend playing a legend," Kendrick Sampson replied. "How thrilling for you, them, and all of us too!!!" said Dewanda Wise. "OMG," Shonda Rhimes added, with a ~crown~ emoji.

Davis, whose career has been defined by portraying impactful women throughout history in films such as The Help and Fences, has been outspoken about her politics in recent years, pointedly calling out the Trump administration.

In 2017, as Vanity Fair reported, Davis suggested she believes the current political issues in the United States are not solely the fault of President Donald Trump, rather, that it's an issue that's "bigger than him," and far more deeply rooted.

"I will, believe it or not, remove Trump from the equation. Because I feel that it's bigger than him," she said in 2017, according to Entertainment Tonight. "I believe that it is our responsibility to uphold what it is to be an American. And what America is about, and the true meaning of what it means to pursue the American dream. I think that America in and of itself has been an affirmation, but I think that we've fallen short a lot, because there is no way that we can have anyone in office that is not an extension of our own belief system."

First Ladies is a series that's certainly poignant, and cannot come at a more important time. Though there's no doubt that Davis will portray Obama perfectly, it will be exciting to see other first ladies and their legacies explored as well.