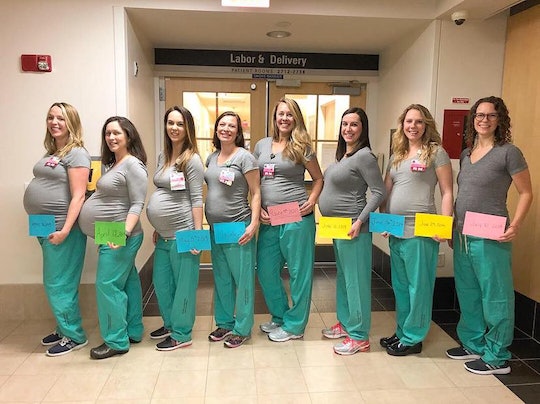 A medical center in Maine is expecting an exponential increase of newborns in its labor and delivery unit, but not for the reason you might think. Earlier this week, the hospital posted a now viral photo of several pregnant nurses who work together at Maine Medical Center in Portland and who are all due between April and July of this year, according to CNN. A total of nine nurses — eight of whom are pictured showing off their bumps in the viral photo — are expecting a bundle of joy in the upcoming months.

More Like This
20 Beautiful Baby Names With The Same Vibe As Mila
Get Ready To Geek Out With These 20 Sci-Fi Baby Names
A 25-Year-Old Mom Thought She Was Pregnant With 7 Babies. She Gave Birth To 9.
The Biggest Baby Name Trends Of 2021 So Far

Since the photo's gone viral, the nurses — and now expectant mamas — have spoken of the support and excitement the group of nurses share from learning of the pregnancies to just coming into work everyday. “After each one of us started to say, 'We're pregnant,' I think it was a happier kind of announcement each time, and we're all there for each other,” nurse Erin Grenier told WMTW in an interview.

Amanda Spear, another nurse at the hospital, also told WMTW that "it's really nice coming to work and seeing other people who are just as pregnant and watching their bellies pop and just talking about these experiences that we are going through together." According to CNN, the nurses even plan to be there for each others’ deliveries.

When some Facebook users commenting on the viral post expressed their concerns about whether or not Maine Medical Center will have enough staff come delivery time, the hospital quickly responded, commenting, “Don't worry! We have a plan.”

Another user jokingly suggested in the comments section of the photo that pregnancy may be contagious, warning, “DON'T DRINK THE WATER!!"

"Congrats ladies! How exciting! I won't be drinking the water in the East Tower...," another person jokingly commented.

Perhaps something really is in the water, because this is just the latest case of a string of pregnancies gone viral. Recently, as Fox8 reported, a photoshoot featuring pregnant wives all married to firefighters at a North Carolina fire department is also making headlines.

The seven expectant mothers of Salisbury Fire Department dressed in their husbands’ uniforms and even had personalized onesies created with the babies’ fathers’ station numbers, according to ABC13. One of the expectant mothers is due as soon as next week and the others are expecting throughout spring and as late as September, Fox8 reported.

Another fire department in Houston, Texas is expecting new baby recruits as well, with 20 — yes, 20 — of Montgomery Fire Department’s staff all welcoming or getting ready to welcome newborns, according to Fox News.

“We joke sometimes when they’re like, ‘Oh it’s something in the water,’” Stephani Stan, a first-time mom, told Fox 26 of the fire department's baby boom. The news outlet noted that a total of 20 percent of Montgomery Fire Department’s 100-member staff is expecting, with all the babies expected to arrive by September.

Whether or not something's in the water, it’s heartwarming to see a sisterhood growing among pregnant women who can share their experiences. It is no doubt an opportunity for women to support one another through times of excitement and change.