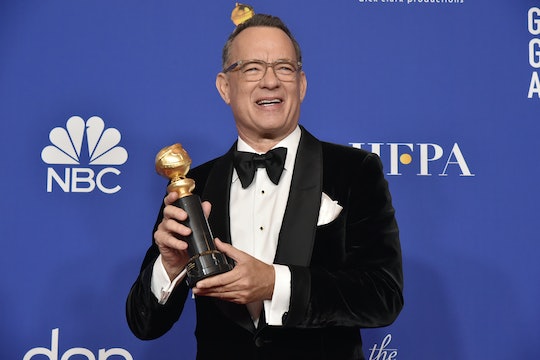 As if the world needed further proof that this year's Cecil B. DeMille Award recipient was one of Hollywood's best, a viral story about Tom Hanks taking a selfie on an unattended phone has proved he's just as funny and sweet as you think he is. While this isn't the first time Hanks has been reported to have taken a surprise photo for a fan, the story may make you think twice about guarding your phone when around the A Beautiful Day in the Neighborhood star.

As Hanks accepted the Cecil B. DeMille Award at the 77th Golden Globe Awards on Sunday, one fan turned to Twitter to reminisce about an unusual encounter their phone once had with the actor. "A number of years ago I left my iPhone unattended in the same room as Tom Hanks," a Twitter user named Whitney Pastorek tweeted. "The next day, I found this photo in my camera roll."

Embedded within Pastorek's tweet was a selfie of Hanks grinning mischievously into the camera. "To be clear: I’ve never met him," Pastorek went on to write in her tweet. "But I do believe he is exactly who we hope he is, and I don't want to know if I'm wrong."

This isn't the first time, however, that Hanks has gifted an unsuspecting fan with a selfie. In 2012, Glamour reported Hanks helped some fans take a series of hilarious photos with a friend who'd reportedly had a bit too much to drink. Then in 2015, The Los Altos Town Crier reported that Hanks used his fame to help a Girl Scout troop boost their cookie sales. According to the paper, the actor agreed to pose for selfies with nearby fans only after they purchased a box or two from the scouts.

Even that's not the end of Hanks' selfie exploits. In 2016, Hanks crashed a couple's wedding photoshoot in Central Park and asked them to pose for a selfie, which he later shared on his official Twitter account along with his sincere congratulations. Later that same year, the San Francisco Chronicle reported that Hanks got creative by gifting a far-away fan a selfie of himself holding up their selfie since the two couldn't pose for a photograph together.

On Sunday, Hanks was honored with the Cecil B. DeMille Award, an honorary Golden Globe Award bestowed by the Hollywood Foreign Press Association to those they consider to have made "outstanding contributions to the world of entertainment." While presenting Hanks with the award, Charlize Theron summed up Hanks contributions to both Hollywood and beyond by saying, "he just makes the world a better place."

Although Pastorek never got to meet Hanks face-to-face, it seems she agrees with Theron's assessment of the man and has cherished the gift he left for her on her phone's camera roll.