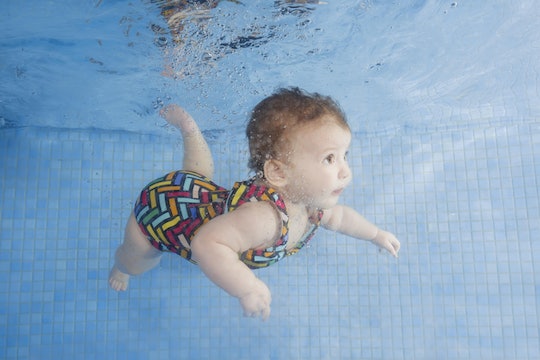 With his adorable cheeks, baby Oliver caused a splash on TikTok earlier this month. But it wasn't Oliver's cuteness that got viewers talking, it was his starring role in that TikTok of a baby being dropped into a pool as part of an infant swim class. The video of then 8-month-old Oliver, which was shared by his mom Krysta Meyer, went viral and sparked a ton of debate, with some going so far as to question Meyer's parenting.

"I have my kids' best interest in mind," Meyer, a mother of two, tells Romper. "Taking kids to swim classes can make drowning 100% preventable and so by me doing that I'm giving my kids a fighting chance."

But Meyer is quick to stress she doesn't view her children's ability to roll over and float as proof that they don't still need constant supervision. "It's not me substituting [swim classes] for watching my kids. I'm not saying that because my kids are water safe now I don't have to watch them," she says. "It's just giving them a fighting chance because I don't want them to drown. They have that fighting chance for me to get to them if there ever was an accident."

Some have criticized Meyer for enrolling Oliver in swim lessons before his first birthday, but Little Fins Swim School, where Oliver takes classes, has defended swim lessons for children as young as 6 months. "Drowning is silent and quick," Lauri Armstrong, the owner of Little Fins Swim School in Colorado Springs, Colorado, tells Romper. "It is the first leading cause of accidental death in kids under at 4 years old, and it is 100% preventable."

Roughly one in five people who die as a result of unintentional drowning are children under the age of 15, according to The Centers for Disease Control and Prevention (CDC). But according to the CDC, it's children aged 1 to 4 who are most at risk of drowning and, in fact, have the highest drowning rates. "Drowning is responsible for more deaths among children 1 to 4 than any other cause except congenital anomalies," the CDC warns.

While there's little debate around the importance of instilling swimming skills in children, the best age to begin that instruction remains a controversial topic. To help reduce the risk of drowning, the American Academy of Pediatrics (AAP) recommends children over the age of 1 be given formal swimming instruction. "Everyone can learn to swim," the AAP said in 2018. "Participation in formal swim lessons can reduce the likelihood of childhood drowning death by 88%." However, the AAP also cautioned that "there is no evidence that swimming lessons or water survival skills courses can prevent drowning in babies younger than 1 year of age."

But infant water survival schools like Little Fins Swim School disagree. They begin teaching infant survival swimming skills such as floating, rolling onto the back, and recovering from various falling positions to children as young as 6 months. They've also noted infants aged 6 months and younger will naturally hold their breath when submerged in water, something research backs up. (This reflex is known as the bradycardic response.) Additionally, Armstrong tells Romper their survival swim training doesn't begin with instructors dropping the baby into the pool but instead start with lessons on floating and rolling.

And while watching Oliver's Little Fins instructor drop him into the pool may have left a number of viewers shocked, Armstrong tells Romper it's done to better prepare babies for the shock and bewilderment an accidental fall might cause. "We do this as part of our safety and survival level to pass, because when kids fall into water, it's not always graceful or pretty," Armstrong says. "It can be a disorienting experience. Kids fly in from moving boats or other crazy situations, and we train for these types of incidents."

In the above video, Oliver's instructor clarifies a few things, including Oliver's age: he was 8 months old in the video, and was "two months in" to his swim lessons.

Even Meyer admits that, for those who don't know the context and background of what's happening, the TikTok of Oliver being dropped into the pool can seem upsetting. "I can understand the controversy around him being tossed in because it's very scary seeing that," she tells Romper. "People were saying that can be traumatic. Do I think that? Absolutely not. If I did, I wouldn’t have them do it."

While Meyer understands why her viral TikTok is shocking to some, she says she ultimately trusts Little Fins Swim School. "Any time we've had questions or concerns, they've always addressed them," she tells Romper. "By them working with our family and answering our questions and helping us with our concerns, I've never had any doubt about what they're doing or them knowing what they're doing."

Of course, this isn't the first time a mother has faced criticism after sharing video of their infant practicing survival swim skills. In 2016, Keri Morrison defended herself in an interview with Inside Edition after video taken during her 6-month-old daughter's infant survival class went viral. In the video, the child can be seen reaching for a floating toy and toppling head first into the water before rolling onto her back and floating for at least a minute. Despite some viewers' concerns, Morrison was adamant her daughter was never in any danger, but was instead practicing potentially life-saving skills.

Meyer too is convinced the skills Oliver has learned in his time at Little Fins Swim School could potentially keep him safer. She tells Romper, "I'm giving my kids a fighting chance because it's not minutes that a drowning happens in, it's seconds."