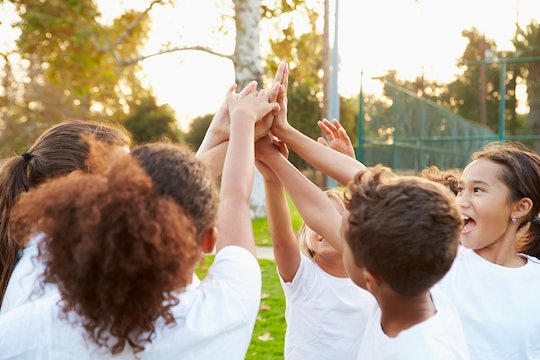 Maybe it's the competitive runner in me, but I've always viewed jabs ending with "like a girl" to be utter nonsense. Because if "running like a girl" meant that I was faster than all but one boy on my track team in the 2-mile run, then I proudly owned that. Plenty of female athletes are absolute beasts in their area of expertise — and they have zero problem with running circles around people. Although some might still perceive the comment, "like a girl," to be the ultimate insult, this viral video of a 6-year-old girl outrunning all the boys in football is a must-see.

On Jan. 16, Kevin Virta shared a video on Twitter of his daughter, Alicia, impressively outrunning all of the boys on the field during a recent flag football game in Boynton Beach, Florida, NBC New York reported. The video shows Alicia — or "Leesha," as her family calls her — skillfully dodging players from the opposing team and then outrunning them all the way down the field for a touchdown. The proud father captioned his tweet with, "My 6-year-old daughter dominating the football field. Shows all those boys what’s up!!" It didn't take long for Virta's video take off on the social media platform. Because this girl has some serious talent. Check her out for yourself!

Oh, and in case you were wondering, Alicia dominates in defense, too.

It didn't take long for Twitter to fall in love with Virta's daughter — and her natural talent on the football field. One Twitter user wrote, "It only took 24 seconds to see how bright her future will be. You must be a very proud father! " to which Virta graciously replied, "Yes I am! Thank you very much!"

Another person commented, "Show them what you’ve got baby girl."

Yet another Twitter user chimed in with, "Yaaasssssss, girl! Get it!!!"

“Leesha is a beast who is the only girl on her flag football team,” her mom, Nikki Virta, told MAKERS. "She loves being the only girl and has very good self-esteem. The boys love her." (Fun fact: This 6-year-old can outrun her 8-year-old brother, even after giving him a 5-second head start.) Alicia also plays on an all-boy basketball team, is a competitive swimmer, and has a black belt in karate. So yeah, I think it's safe to say she's destined for great things. According to Nikki, Alicia — who is a New England Patriots fan — has high aspirations for herself, too. "She wants to be the next GOAT like Tom Brady!" Virta told MAKERS.

Honestly, with killer moves like the ones she displays in this video, I have no doubt that Alicia will go on to be a force in higher-level athletics. Who knows? Maybe straight-up running will be her true calling, and she'll be the next Jasmin Paris — a mom who recently won a 286-mile race (beating all males and females) while pumping breast milk. One thing's for sure: The sky's the limit for this talented little girl. And I have a feeling this isn't the last epic sports video we'll be seeing of her.