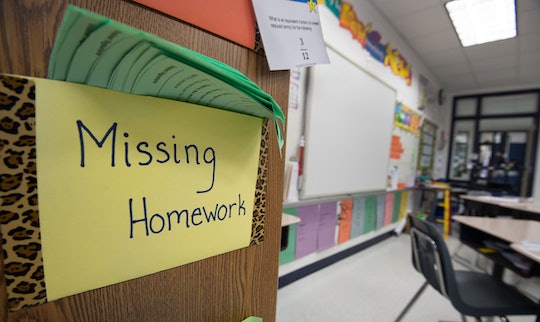 The teacher of a world geography class at Riverheads High School in Staunton, Virginia, gave students an assignment on Islam during the course's discussion of major world religions last Friday, according to the Staunton News Leader. When students took the assignment home, parents were outraged. Their rage has become so overblown that the Virginia school system closed schools on Friday, according to the Washington Post. Now, as a result of the U.S.' hypocritical fear of non-Christian religions and these parents fear-mongering, the students in the Augusta County School District are being denied an education, and it's complete crap.

During the world religions lesson — which included lessons on religions that are not Islam — teacher Cheryl LaPorte reportedly gave students a lesson that involved practicing calligraphy and writing a Muslim statement of faith, called the shahada, according to the News Leader. The statement reads "There is no god but Allah, and Muhammad is the messenger of Allah," according to the News Leader. LaPorte also reportedly showed students copies of the Quran.

Parents of the students were so pissed that, on Tuesday, one of them organized a forum to chastise the teacher. Kimberly Herndon, who organized the forum, said Herndon was obviously trying to indoctrinated the high school students, according to the News Leader:

We regret having to take this action, but we are doing so based on the recommendations of law enforcement and the Augusta County School Board out of an abundance of caution.

Yeah — a group of educators had to close down schools in an entire county in Virginia because, it sounds like, they were fearful of the content of messages coming from parents. There are so many things wrong with this scenario but the two biggest issues are these: Parents are spewing hate-filled, insensitive messages that are making people fearful of their safety and those messages are only going to perpetuate Islamophobia and a lack of tolerance for religious diversity.

The Post reported that the teacher "did not have the students translate the statement into English, require students to recite the statement, or say they believed in it," which should seal the deal. Further, the school said that students will continue to learn about a variety of religions — including Christianity and Islam — as required by state academic standards, but the assignments will now have nothing to do copying statements from Islam.

In a country where students of all religions openly pledge allegiance to a flag "under God," not only does this reaction from parents seem hypocritical, but it's detrimental to students' abilities to learn the truth about other religions. By treating Islam like an evil religion that has to be counteracted by "the Lord's time," parents are cementing the belief that Muslims follow a religion that is evil, which only further reinforces false and negative stereotypes.

Think Progress reported that there have been at least 42 incidents of "violent attacks, threats, assaults, protests, and instances of vandalism" against Muslims since the Paris terror attacks on Nov. 13. Unfortunately, that is the result of the kind of hypocritical, defensive rhetoric being used by parents in Augusta County, Virginia. Unless people start embracing the fact that there are different — and predominantly non-violent — religions in the U.S., then kids will continue perpetuating fear and hate.