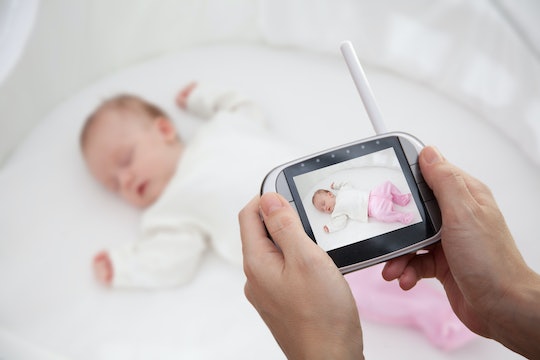 Bringing a baby home for the first time can be a truly terrifying undertaking. Not only are you suddenly entirely responsible for keeping a tiny human alive, it can also seem like the world has turned into one giant, baby-killing death trap, full of formerly-safe-but-now-deadly things like dangling window blind cords and button batteries. That anxiety is likely what makes heart rate measuring baby monitors seem so appealing to new parents — if something awful were to happen, they could theoretically alert you before it's too late. But a new study found that vital sign measuring baby monitors may not do much to actually keep babies safe at all. And, in fact, they could end up causing more harm than good for worried parents and their infants.

When I first learned that these seemingly-miraculous baby monitors existed, I was one seriously-grateful mama. I'd given birth to twins at only 25 weeks gestation, and with a long NICU stay ahead of us, watching my babies' heart rates and oxygen saturations on the hospital monitors became a big part of my life. But when it finally came time to turn them off months later, I was so afraid — how would I know if they were OK if I couldn't see the data? When I brought the idea of purchasing one of these "smart" monitors up with the NICU staff though, their recommendation was pretty clear: don't do it. And a new study from researchers at the Children's Hospital of Philadelphia (CHOP) is the latest to suggest that that was definitely the right call.

The study's leader, CHOP pediatrician and child safety expert Dr. Chris Bonafide, explained that his team looked at two popular commercial baby monitors to test how accurately they were able to detect low oxygen levels (hypoxia) in infants, according to Science Daily. And the results, published Tuesday in the Journal of the American Medical Association (JAMA), were pretty concerning. Although one monitor did manage to detect the decreased oxygen levels, the researchers found it to be inconsistent. The other? It didn't detect the decrease *at all*.

The researchers tested the commercial monitors on 30 infants aged 6-months-old and younger, who were hospitalized in CHOP's Cardiology and General Pediatrics units. These patients' vitals were already being monitored with standard hospital-grade monitors, but they also wore one of the two commercial monitors for comparison's sake. And it sounds like the home monitors' readings were spotty at best: one was able to catch "at least one simultaneous" reading of low oxygen in 12 patients who experienced it, but, it also mistakenly showed that "five of those 12 infants had normal oxygen levels" when they actually didn't. The first monitor was much more successful than the second though: according to the study, out of 14 patients who experienced hypoxia while wearing the second commercial monitor, none of the episodes actually registered.

Missed readings weren't the only issue the researchers found, though. The study found that false positives were also a problem with the two home monitors: 14 patients who had normal pulse rates while wearing the second monitor were reported to have heart rate dips (bradycardia) when they actually didn't. And while false positives might technically at least be preferable to false negatives (at least the children were actually fine when the monitor went off), they're certainly not without consequences: inaccurate readings can mean that scared parents may end up calling 911 or bringing their children to the emergency department when there is actually nothing wrong, which could lead to unnecessary testing and other risks.

The takeaway for parents? If your baby is healthy enough to be home with you in the first place, chances are they don't need to be monitored — and as appealing as these monitors may seem for peace of mind, they may just end up stressing you out. While it's true that, in some cases, continued monitoring is recommended (in the case of some preterm infants, for example, or for babies born with other health issues), those children are monitored with actual hospital-grade equipment, not commercial monitors. In fact, the commercial monitors tested aren't technically considered medical equipment at all — a detail which also means they don't even have to receive premarket approval by the United States Food and Drug Administration (FDA), according to TIME.

What's more though is that that even hospital-grade heart rate and oxygen monitors haven't actually been shown to reduce the risk of Sudden Infant Death Syndrome (SIDS) according to The Washington Post. And in its 2016 recommendation for SIDS prevention, the AAP specifically advises that parents "not use home cardiorespiratory monitors as a strategy to reduce the risk of SIDS."

What parents should do though, is follow the already-proven recommendations for safe sleep habits, as outlined by the AAP. They include putting infants to sleep on their backs, on a firm surface, without any other bedding or soft objects that could pose a suffocation risk, for example, and not using "car seats, strollers, swings, infant carriers, and infant slings" for sleeping purposes, especially with infants younger than 4 months. Breastfeeding is also associated with a reduced risk of SIDS, according to the AAP, as is having your baby sleep in the same room as you (but in a separate bed) at least for the first six months. And parents should also ensure their infants are kept away from any exposure to cigarette smoke, which increases SIDS risk.

It makes sense, of course, that parents would want to take as many preventative measures as possible to keep their infants safe, and at a time when so many of us already rely on technology so much in our daily lives, these baby monitors seem like an ideal solution. But the research makes it pretty clear that, at best, these products might just be an unnecessary expense. And at worst? They could end up causing already-stressed-out and sleep-deprived parents even more anxiety, without actually keeping their children any safer than they would be otherwise.

More Like This
Here’s Your Guide To Paced Bottle Feeding
Experts Explain Whether It’s Safe For Your Baby To Sleep On Your Chest
How Much Hair Loss Is Normal? 9 Signs You’re Losing Too Much Hair
6 Sex Positions To Reduce Leg Pain