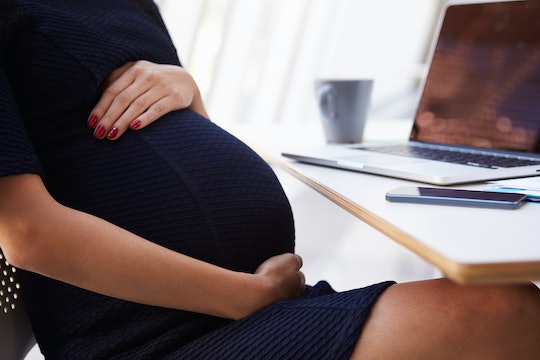 Here's Why Every Pregnant Woman Should Start Taking Vitamin B3, Like, Yesterday

It's well known that multivitamins are essential for a healthy pregnancy. They benefit growth and development, and can reduce the risk of complications. And now scientists have discovered a bit more on how vitamins can affect pregnancies. Specifically, a new breakthrough study found that vitamin B3 may help prevent birth defects and miscarriage.

According to Science, Australian researchers recently studied DNA from four families affected by multiple miscarriages and complex birth defects, and found mutations in the Nicotinamide adenine dinucleotide (NAD) molecule, which helps create energy and aid organ development. But the scientists also discovered that an extra dose of vitamin B3 can make up for the body's inability to make NAD, which in turn would reduce the risk of miscarriage and birth defects will decrease.

Lead researcher Sally Dunwoodie told BBC of the findings, which were published in The New England Journal of Medicine,

It bypasses the genetic problem. It's rare that you find a cause and a prevention in the same study. And the prevention is so simple, it's a vitamin.

Natural sources of vitamin B3 — also known as niacin — include wild salmon, peanuts, mushrooms, liver, tuna, green peas, sunflower seeds, avocado, and meats such as turkey, venison, and chicken breast. Vitamin B3 can also be taken as a supplement.

B vitamins are essential for nutritional health during pregnancy. According to the American Pregnancy Association (APA), the vitamin B complex helps relieve some pregnancy symptoms, reduce the risk of certain health complications, and promote fetal development. Vitamin B3, in particular, is known to aid your baby's brain growth, as well improve digestion and protect your nervous system, mucous membranes, and skin.

Vitamin B3 is not stored in the body naturally, meaning that a pregnant person would need to eat foods rich in niacin, or take a dietary supplement. But the APA cautions against using B3 supplements, especially if you are already on prenatal vitamins, which contains 20 milligrams of niacin typically, according WebMD. Taking too much niacin can lead to gout, diarrhea, abdominal pain, nausea, vomiting, itching , rapid heartbeat, and severe skin flushing combined with dizziness.

Although it's known that vitamin B3 already plays a role in pregnancy health, The New England Journal Of Medicine study provides deeper insight into how exactly niacin can affect development. The authors, though, do admit that more research is needed before doctors could start recommending B3 supplements, according to Science. Still, pregnant people may be able to up their niacin intake by changing their diets, providing them with a natural source of the beneficial vitamin.

But there's a problem with suggesting a change in diet. According to the National Women's Law Center, more than one in eight — or nearly 17 million — women live in poverty. That statistic would suggest, then, that millions of pregnant women could not afford to buy fresh foods, which research has shown to be astronomically more expensive than processed items.

Federal programs like WIC are meant to defray these costs in order to help pregnant people keep healthy diets. But, as Slate reported in 2015, WIC is actually an inefficient system that limits pregnant people and new parents to a very restrictive grocery list. Many of the foods rich in vitamin B3 would most likely not be eligible for WIC. So that would mean that maintaining a nutritious diet rich enough in vitamin B3 is out of reach for most pregnant people living in poverty.

In the end, what this Australian study shows is that who has access to affordable, fresh food needs to change. The rate of birth defects or pregnancy complications can't be lowered if policies keep pregnant people away from the things that would keep them healthy and strong.