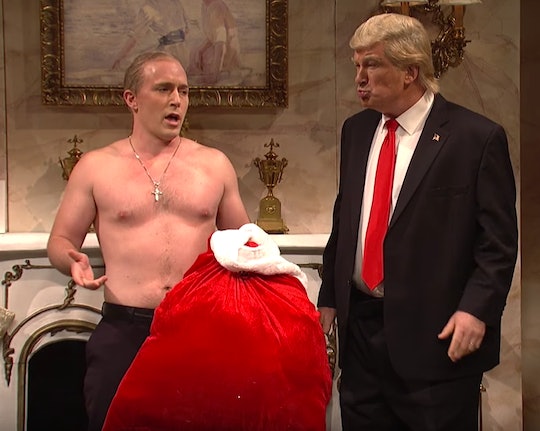 "Vladimir Putin" On 'SNL' Was The Holiday Surprise Everyone Needed

The holidays are getting closer, which is usually a reason to celebrate. Who doesn't love a few days off from work, getting presents, and eating until your stomach hurts?! This year, though, is a little bit different. Every day that passes brings us that much closer to the official start of Donald Trump's presidency. For many in our country, this fact is casting a foreboding shadow over the holiday season. The most recent episode of Saturday Night Live poked some fun at this un-presidented lead up to Inauguration Day. The show brought back Alec Baldwin's Trump and Kate McKinnon's Kellyanne Conway, as well as some hilarious additions like Beck Bennett's Vladimir Putin, which was the SNL holiday surprise everyone needed.

After going over how many more Cabinet members he has to appoint, with Kellyanne Conway leading the charge, the fictitious Trump hears a mysterious noise coming from the fireplace. Baldwin turns to SNL cast member Cecily Strong, playing Melania Trump, and asks "what's that sound? Is it a ghost? Am I being Scrooged? I hate that." It turns out it wasn't the Ghost of Christmas Past, popping in for a visit, but the President of the Russian Federation himself. Sans-shirt, of course.

Bennett's delightful surprise as a shirtless Putin Claus, popping in on America's Tweet-friendly president-elect, wasn't the only trick SNL had up its sleeve. The show also brought out frequent SNL guest John Goodman to play Rex Tillerson, the CEO of ExxonMobil Corporation and Trump's pick for secretary of state. Besides his white wig and glasses being spot on, Goodman played Tillerson as a happy-go-lucky evil mastermind plotting global oil domination with Putin. (While it was funny to watch the two ignore Trump as he carried on about taking down Vanity Fair and being friends with Kanye West, we should still keep in mind that the real Tillerson and Putin are friendly with each other as well, which has many in America rightfully concerned.)

Another highlight of Saturday's episode was Kate McKinnon reprising her iconic Hillary Clinton impersonation for a short skirt. SNL recreated the memorable scene from Love Actually when Andrew Lincoln's character appears at the door of Keira Knightley's character with a series of signs revealing his love for her. In this skit, though, it's McKinnon's Clinton who stands outside a member of the Electoral College's house. She isn't revealing her hidden love, but instead pleading with them to vote against Trump on Dec. 19.

This was the last episode of SNL for 2016 and the show certainly went out on a high note. We might not be able to stop Trump from taking office in January, however, SNL proves time and time again that humor is often the greatest comfort out there, no matter what real life may hold.