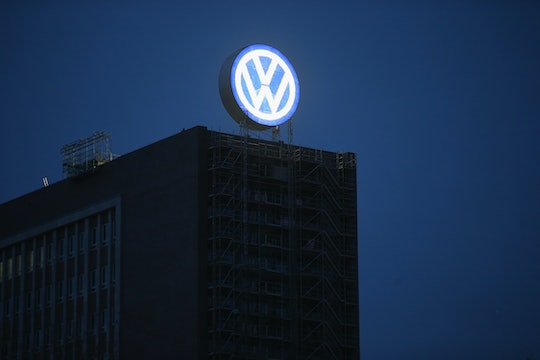 The year 2015 is proving to be quite a bad one for German car manufacturer Volkswagen; and judging by the latest news, it doesn't seem to be getting better any time soon: On Tuesday, Volkswagen admitted to more carbon dioxide emissions issues in another 800,000 vehicles. Though the vehicles involved to not include those sold within the United States, they do affect several models sold throughout Europe. The company also stated that this new crisis could cost $2.2 billion to solve, which means the bad publicity will likely continue. Of course, the impact this has on consumers can't be ignored — an estimated 11 million Volkswagen vehicles have been affected by the emissions scandal this year, and it's hitting the market hard.

During the course of internal investigations irregularities were found when determining type approval CO2 levels.

CO2-emissions and therefore also fuel consumption of certain models have been stated too low. Based on present knowledge around 800,000 vehicles from the Volkswagen Group could be affected.

The Board of Management of Volkswagen AG will immediately start a dialog with the responsible type approval agencies regarding the consequences of these findings. This should lead to a reliable assessment of the legal, and the subsequent economic consequences of this not yet fully explained issue.

Under the ongoing review of all processes and workflows in connection with diesel engines it was established that the CO2 levels and thus the fuel consumption figures for some models were set too low during the CO2 certification process. The majority of the vehicles concerned have diesel engines.

In cooperation with the responsible authorities, Volkswagen will do everything in its power to clarify the further course of action as quickly as possible and ensure the correct CO2 classification for the vehicles affected. The safety of the vehicles is in no way compromised.

In September, VW’s Board of Management ordered their cars be thoroughly inspected after the Environmental Protection Agency (EPA) found some of their diesel cars’ software were skewing emissions’ readings. In light of their “comprehensive investigation,” VW determined the issue is larger than they thought. In the statement, the company said it “deeply regrets this situation,” though will continue to be transparent with business practices in the future. The statement also continued:

We wish to reiterate that the safety of these vehicles is in no way compromised. A reliable assessment of the scale of these irregularities is not yet possible.

News from the scandal's fallout has permeated the news cycle in the two months' since. And though VW claims it is working hard to improve its image and make good on its promise to consumers, as recently as Monday the EPA announced 10,000 more VW cars have this problematic software. In a statement, Assistant Administrator for the Office for the EPA’s Enforcement and Compliance Assurance Cynthia Giles claimed the company “once again” had not followed emissions laws intended to keep American air clean. Giles continued:

All companies should be playing by the same rules. EPA, with our state, and federal partners, will continue to investigate these serious matters, to secure the benefits of the Clean Air Act, ensure a level playing field for responsible businesses, and to ensure consumers get the environmental performance they expect.

Amid the controversy, VW is still working to improve their image. According to an official VW statement translated from German by Buzzfeed, CEO Matthias Müller claimed on Tuesday that all the “tireless” work being done to improve quality is not in vain. Müller also said in the statement:

We’ll stop at nothing. This is a painful process, but there is no alternative for us. What counts for us is solely the truth. This is a necessary step for the fundamental shift Volkswagen needs.

Here's hoping this latest news will be the last of its kind for the car manufacturer, and its consumers.