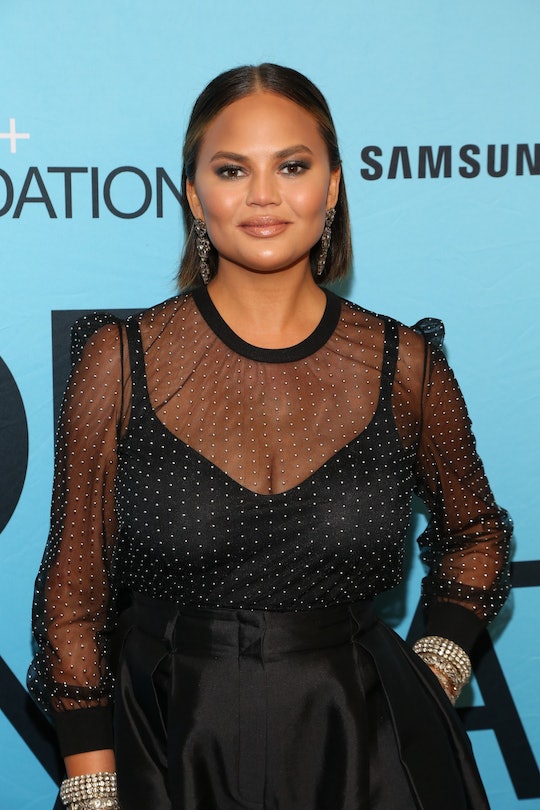 In addition to being one-half of one of the most beloved celebrity couples in existence, Chrissy Teigen also happens to be the queen of Twitter, and is without a doubt the celeb mom everyone wants in their squads. In fact, Teigen's unapologetic honesty and openness can sometimes make it feel like we know everything there is to know about her, but on Tuesday night, she dropped a pretty big bombshell: we've all been pronouncing Chrissy Teigen's name wrong this whole time.

Honestly, at first I wasn't sure how that was even possible — I mean, I'm *sure* I've heard her say her own name before in an interview. But could it have somehow been a Mandela-effect false memory all this time? Could we have all just have made a collective assumption that has stuck no matter how many times she's said her own name correctly? Curious, I turned to YouTube to investigate, and I was able to confirm that Teigen herself has pronounced her name the way the rest of the world always has: TEE-gen. But her recent tweet on the matter suggests that, actually, pronouncing it that way was a deliberate decision on her part. In response to a Twitter thread about people going along with the mispronunciations of their own names, one user replied and said that Teigen, too, was one who ended up adopting the mispronounced form of her name. And then, well, she chimed in to confirm: Teigen wrote, "word! gave up a long time ago. last name is tie-gen not tee-gen."

Granted, in the grand scheme of things, finding out that Chrissy Teigen is actually Chrissy TIEgan, probably shouldn't be earth-shattering news. Except that, well, it absolutely *is* earth-shattering news. There are few celebs out there, after all, who feel as easy to relate to as Teigen, and it often means that her fans end up feeling more or less like they know her. It's why we feel so heartbroken when our fave celebrity couples announce a split (how dare these strangers I've never met go and break my heart like that?!), and it's also why we continue to follow them and support their various projects. So finding out that, actually, we've all been saying her name wrong this entire time? It feels really weird.

Then again, Teigen's decision to stick with the mispronounced version of her name makes a lot of sense. Not only do celebs often change their names (for one, Teigen's husband, John Legend, is actually John Stephens), but anyone who has ever had the misfortune of having a name that is constantly butchered by nearly everyone who has to try to pronounce it, can understand that sometimes, it's just way easier to stick with something you aren't forever ending up having to correct.

But it looks like she isn't even the only celeb who has decided to go with the popular-yet-technically-incorrect pronunciation of their name. Going back through the original tweets on the thread linked to Teigen, there is actually a video pointing out that Ariana Grande also seems to have decided to stick with the version of her name people prefer to say.

In the clip, radio hosts Kyle and Jackie O noted that, while pretty much everyone on the planet pronounces her last name like they're ordering a medium at Starbucks, in a recent interview, the singer actually pronounced her name "Grand-ee."

But once again, thanks to the power of the internet, there's also plenty of proof that Grande herself seems more than happy to roll with the name the world seems to want her to have. In a separate video of the singer just introducing herself over and over, she clearly says her name the way we all expect her to:

It's not exactly clear now what we're supposed to do with this very unexpected information: should we continue calling Teigen and Grande by the wrong names? Might Teigen now finally decide to embrace the proper pronunciation of her name now that the cat is out of the bag? Will it even be physically possible for our mouths to collectively refer to Ariana Grande as "Ariana Grand-ee," because honestly I'm not even sure my mouth will allow that?

In all likelihood, both ladies will just continue to allow us all to call them by a different name, because hey, that's show business. But, if nothing else, it's a pretty validating reminder for everyone out there with hard-to-pronounce names that even celebrities have to endure name-related frustration.