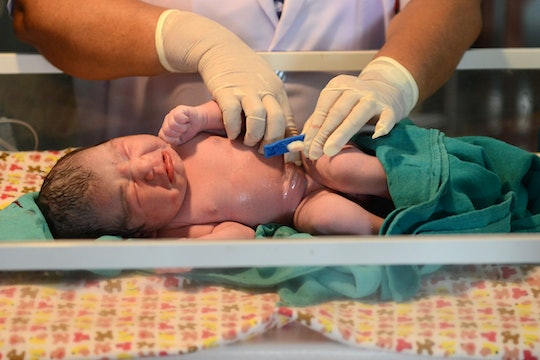 Cutting The Umbilical Cord Later May Be Beneficial

The umbilical cord is made up of a vein and two arteries, encased in a what kind of looks like insulated tubing, that connect the fetus to the placenta, through which the fetus is nourished while in utero. The placenta is kind of like the baby's lungs, and the umbilical cord passes oxygen-rich blood to the baby while they're in the womb and, therefore, surrounded by amniotic fluid. When a baby is born and exposed to the outside world for the first time, it can be pretty jarring to all of a sudden have to breath actual air. The placenta continues to work even as the baby takes its first breath outside the womb, at least for a few minutes. The timing of severing that connection has been a topic of debate for decades, especially between obstetricians and midwives.

Prior to the era of commonplace hospital births in the 1950s, many babies were delivered at home. It's long been the practice of midwives to cut the umbilical cord when it stops pulsating, usually about five minutes after birth. But for many years there just wasn't any research on whether the timing of cutting the umbilical cord actually mattered. More modern recommendations from the American College of Obstetrician and Gynecologists (ACOG) that have prevailed for the last fifty years or so stated that the cord should be cut 15-20 seconds after birth — at most, clamped and cut after a minute. Other organizations outside of the United States, including the World Health Organization, recommend that the cord be cut up to 3 minutes after birth, and no earlier than one minute.

The ACOG's recommendations have been reevaluated, particularly in the case of pre-term babies. Doctors wondered if babies born a little too soon might benefit from delayed cord clamping, so they would get as much of the placenta's rich blood as possible. Studies showed that delaying the cutting of the umbilical cord in preemies lead to a lower risk of transfusions, anemia, and brain bleeds, according to STAT News. A Swedish study showed that preemies weren't the only ones who stood to benefit from delayed clamping: The babies in that particular study also had lowered risk of iron deficiency.

Over the last decade, researchers also realized that the umbilical cord was a rich source of stem cells. "Cord banking" is now considered an option for umbilical cords, other than just tossing them out as medical waste.

The latest research has now been factored into ACOG's recommendations for cord clamping for both term and pre-term babies. The Committee on Obstetric Practice released new guidelines for 2017 and beyond state that cord cutting should be delayed at least 30 seconds to one minute after birth. And for partners who were looking forward to being the one to cut the cord, don't worry: It's still allowed, you just might have to wait a little longer to do it.