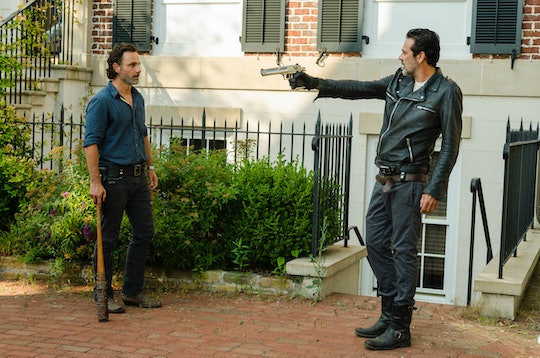 'Walking Dead' Comics Spoilers That Will Make You Second Guess Everything

Though The Walking Dead remains close to its source material in many ways, not every moment is lifted directly from its comics counterpart. The show still has to keep fans in suspense and they can't do that without the element of surprise, so certain things are changed up throughout the adaptation. While many of the plot beats are the same, they don't always unfold in the same way or at the same time. Some things are even changed entirely. But even though the comics can't provide a failsafe guide for those fans who are nervous about the futures of their favorite characters, they can be an interesting point of comparison. In fact, some of The Walking Dead comics spoilers out there will make you second guess everything you know about the show.

It makes sense that the show would alter things from the comics, and not just because they want to keep things fresh. Certain aspects of the story read better when printed and drawn than they do playing out in live action; comics have a way of pulling off broad storytelling in a way that might seem silly when watching actors go through the same motions on-screen. There are also certain things that can't be accounted for, such as actor availability and even chemistry. All of those variables can change things — not to mention the existence of certain wild card characters who weren't even in the comics. But I'll get to that in a minute.

So if you don't mind being spoiled on what's to come, here's a look at what goes down in the comics. But whether or not it plays out that way on the show has yet to be seen...

Let's get this one out of the way. Negan is quickly wearing out his welcome on the show, but you're going to have to get used to him, because he'll be around for a while to come. He wasn't killed in the comics, but instead kept imprisoned for two years before escaping. Now he's trying to get into Rick's good graces and fight on his team against a new threat, but it's anyone's guess how long that will last.

Speaking of new threats: the Whisperers are the newest group terrorizing the heroes in the comics. Like other groups that have done so in the past, they are amoral killers who take out fan favorites (such as Ezekiel and Rosita, R.I.P.) to make a dramatic point. The difference with them is that they dress up in zombie guts for fun. Gross.

No one would be too sad about this, right? In the comics, Spencer approaches Negan with a deal to take out Rick and take his place, making Spencer the brand new Negan-sympathizing leader of Alexandria. Negan is unimpressed by Spencer's sneakiness, though, and guts him, leaving him to bleed out on the pavement. R.I.P., I guess.

Love Is In The Air

Romantic relationships are definitely one of the most changeable elements of The Walking Dead. On the show, there are a few couples still going strong, chief among them is Rick and Michonne. However, in the comics, Rick is actually with Andrea (who is still alive!) and Michonne gets together with Ezekiel, who looks like he might be making a move on Carol in the show. Other unexpected pairings include Rosita and Eugene as well as Aaron and Jesus, who express tentative interest in each other after the death of Aaron's boyfriend, Eric.

Believe it or not, Daryl was a character created purely for the show and dropping a character who didn't exist before into the narrative certainly has had ripple effects. Daryl is one character whose actions can't be predicted based on what happens in the comics because it's all unfolding for the first time for him.

Who Lives, Who Dies, Who Tells Your Story

Knowing how events play out in The Walking Dead comics doesn't actually provide more security when it comes to the show. They may have some of the answers, but at the end of the day — anything can happen.