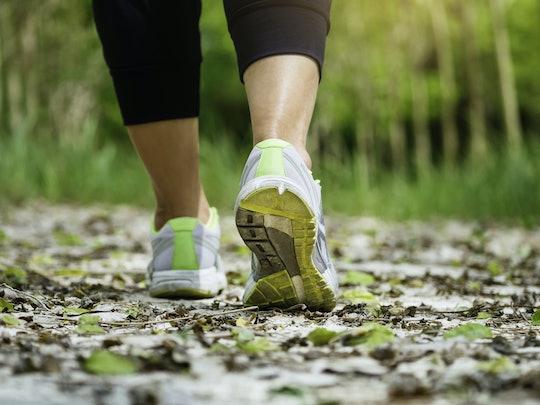 Walking Might Help You Get Pregnant After A Miscarriage, New Study Finds

Difficulty conceiving can be a heart-wrenching experience, and it's compounded for women who have previously been able to conceive, and lost a pregnancy. But now, there may be a new reason to feel optimistic, because a new study found that walking might help you get pregnant after a miscarriage. University of Massachusetts at Amherst School of Public Health and Health Sciences professor Brian Whitcomb and recent graduate Lindsey Russo conducted a secondary analysis of the data from research into a study on aspirin during pregnancy, according to Science Daily, and they discovered that walking for at least 10 minutes at a time was associated with a vast improvement in fecundability, or the ability to conceive, among over average weight or obese women.

The study, published in the Oxford University Journal of Human Reproduction, tracked 1,214 healthy women ages 18 to 40 years old with a history of one or two pregnancy losses, following them for up to six menstrual cycles while they attempted to conceive, and throughout the pregnancies for those who succeeded. Moderate physical activity was not associated with any difference in fecundability, and walking didn't produce the same results for women with mid-range or low body mass index, but the authors also found that women who reported spending more than four hours a week on vigorous activity had "significantly higher pregnancy chances" compared to those who had no vigorous activity.

Lifestyle is definitely relevant to these outcomes because it can have an effect at the molecular level. What we eat and what we do are potential factors we can change to shape our health. So this sort of research is important because it helps provide information on the things people can actually do something about.

The authors hypothesized that physical activity may influence the ability to conceive by altering endocrine function, while also reducing stress and anxiety. Study participants self-reported their activities via a questionnaire, which defined vigorous activity as "activities that take hard physical effort and make you breathe much harder than normal." However, they caution that very high levels of exercise may have an adverse effect on fertility, as it increases the risk of amenorrhea, or the absence of menstruation, so don't go crazy.

The American College of Obstetricians and Gynecologists advises women with uncomplicated pregnancies to engage in exercise before, during, and after pregnancy, noting that it improves physical fitness, reduces the risk of gestational diabetes, and "enhances psychologic well-being." Concerns that exercise may lead to miscarriage in an uncomplicated pregnancy are unsubstantiated, according to ACOG. A "complicated" pregnancy, if you're wondering, is one where the patient has certain heart or lung diseases, cervical insufficiency, risk factors for preterm labor with multiples, placenta previa, preterm labor, preeclampsia, or anemia. People with those conditions may be able to exercise, but they should talk to their doctor first.

About 10 to 20 percent of pregnancies end in miscarriage, according to the Mayo Clinic, although that number may actually be much higher, since women may miscarry very early, before they realized they were pregnant. Only 1 percent of women miscarry two or more times, but the risk increases for each one. After one miscarriage, the risk of another is about 14 percent, after two, it increases to about 26 percent, and after three, 28 percent. But again, that's still only slightly higher than the average woman's risk. If you've had two or more consecutive miscarriages, the Mayo Clinic recommends asking your doctor about testing to identify any underlying causes before attempting to conceive again. Make sure to ask them about exercise, as well.