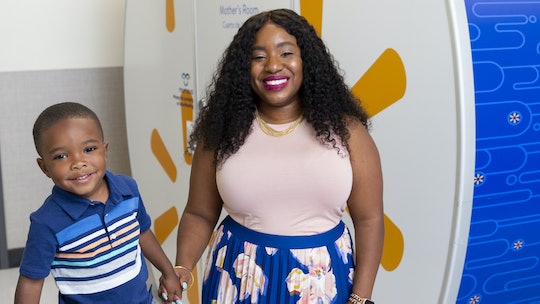 Finding a private place to breastfeed in public can be a huge challenge — and half the time, the best you can do is a dirty dressing room or worse, a bathroom stall. That's why Walmart's Mamava lactation suites, or pods, are such a big deal: the freestanding spaces give moms a clean and comfortable place to nurse or pump when they need it, and the best part is that bringing these pods to Walmart was the brainchild of a breastfeeding mom and Walmart associate, Tennille Webb. After seeing a Mamava pod while traveling, Webb was inspired to bring the idea to her company and make it happen (and just in time for Black Breastfeeding Week, too).

Webb knew firsthand how important it is for nursing moms to get the support they need.

"Honestly, my breastfeeding journey started out rocky," Webb tells Romper over email. "I had gestational hypertension and my son was breech so I had to deliver him via C-section. My son was born a few weeks early and was immediately rushed to the NICU. I did not touch my son for almost 12 hours after he was born."

Webb, a Sr. Business Relationship Manager for Walmart, tried to pump colostrum in the hospital but was unable to produce anything. "I was incredibly frustrated and eventually had to agree to give my son formula while in NICU," she says.

"Ultimately, we were released from the hospital and once home I attempted to nurse him but he continued to lose weight. We tried a supplemental nursing system, nipple shields and multiple visits to the lactation consultant. I almost just stopped nursing but one day, he latched and everything fell into place."

Back at work, Webb was able to start pumping on a schedule as her building has several "Mother's Rooms" available for use — but travelling was a different story.

"I never felt embarrassed to nurse in public but because I travelled quite a bit when my son was exclusively breastfeeding, I felt pressure and stress in regards to pumping," Webb says. "Finding private, clean secure places to pump when on the road was a challenge. I eventually purchased an adapter for my pump so that I could pump in my car when necessary. Really learned how to store and transport milk to keep it safe while in a vehicle for long hours or when flying."

It was during her travels that Webb came across a Mamava pod and knew it could work for Walmart.

"I thought that the Mamava pod was an awesome option for nursing moms," Webb tells Romper. "It had a great design and I loved the sense of privacy, security and peace that I felt when I entered the pod. The Mamava has cool features that a normal Mother’s Room doesn’t usually have." Some of Webb's favorites include the ability to control lighting and fan speed, how roomy the pods are, and the fact that they come equipped with outlets for pumps or other electronics. Plus, you can interface with the Mamava app to find out if a pod is available (then to unlock and access the pod). You can even leave "digital notes of encouragement" for other moms.

This week's launch follows a successful pilot in three Walmart stores last year, with plans to install Mamava pods in more than 100 stores across the country by the end of this year (and more in the years to come).

"Walmart already provides an appropriate, private space for our store associates to pump. That said, we are always looking for new ways to support our associates and serve our customers," Anne Hatfield, Walmart Global Communications, tells Romper in an email.

“We started Mamava to ensure that every breastfeeding mother could choose whether or not to breastfeed, so we set out to remove all barriers to making that choice,” Sascha Mayer, Mamava’s CEO and co-founder, says in a press release. “Walmart’s commitment to supporting breastfeeding associates and community members with Mamava pods is a huge leap forward for inclusivity and normalizing breastfeeding culture.”

And the fact that Walmart is launching the pods during Black Breastfeeding Week only makes Webb's accomplishment that much more meaningful.

"As a Black woman, Black Breastfeeding Week matters to me because Black maternal and Black infant health matter," Webb says. "Although breastfeeding initiation rates have improved among Black women there is still a significant gap in breastfeeding as compared to rates among White and Latinx women. Breastfeeding has so many wonderful benefits for both baby and mom, I want to ensure that Black women have information and education to make an informed decision for their babies."

Walmart currently has Mother’s Rooms in several hundred stores for associates and customers to use. The Mamava pods are intended for select stores without a Mother’s Room, offering moms another choice. Moms can open them up with Mamava’s free app (available for iOS and Android). To learn more, visit Mamava at mamava.com.