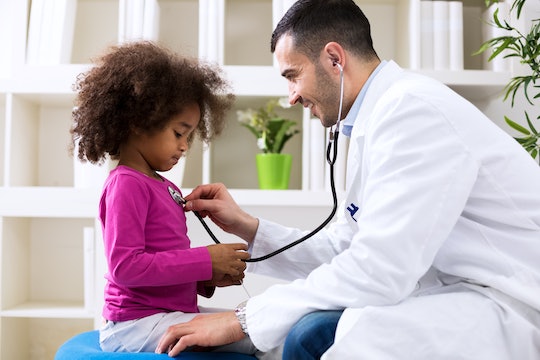 How A Daycare Teacher, A Pediatrician, & A Mom of Four Avoid Getting Sick All The Time

There is nothing ruder than a cold on a 90-degree day. But for those of us in charge of multiple sets of sticky fingers, colds are just as likely to arrive in August as they are in the depths of January. And when it comes to common illnesses, it sometimes feels like there’s only so much we can do to avoid catching a cold, the flu, or that godforsaken stomach virus doing the rounds at daycare. For people who spend most of their days with young children, that feeling of inevitability goes double.

According to the CDC, adults have an average of two to three colds per year — and children have even more, making it especially important that you take extra precaution if you come into contact with contagious kids. And when it’s your job to do exactly that, you have to pretty much develop an impenetrable immune system, like Daniel Summers, a pediatrician in the Boston area.

Summers attributes the majority of his consistent health to being “scrupulous about hand-washing,” noting that it’s the most important thing he does to prevent himself from getting sick, or from passing illnesses between patients. He tells Romper that he makes sure to wash his hands or use sanitizer before and after every patient visit, adding that he’d recommend anyone who comes in contact with children on a regular basis do the same.

Incidentally, Summers’s advice is right on par with what the CDC also recommends to protect against viruses like the cold and the flu. Because viruses spread between people through both the air and physical contact, it’s important to wash your hands for at least 20 seconds, and avoid touching your face with unwashed hands, the CDC says.

Having worked as a pediatrician for 13 years, Summers prides himself on having an “ironclad immune system.” However, he did come down with conjunctivitis several years ago, likely contracting it from a patient at some point. “There are clearly gaps in the armor here and there,” Summers adds. “Which is simply a reminder that hand washing is super important.”

Kara, a daycare employee in a suburb of Chicago, would agree. “I must wash my hands like 50 times a day,” she tells Romper, noting that she’s managed to avoid bad colds and the flu during the five years she’s been working with young children. Kara, who asked that her last name not be used, adds that her daycare has a sick policy, which asks that children be kept home if they are contagious.

“Of course, it doesn’t always work,” she says. “Kids sometimes come to daycare when they’re still sick, and some kids just have perpetually runny noses. That’s why we try to teach the kids healthy habits, too.”

But teaching children healthy habits can be tricky, especially when dealing with young toddlers. Kara says that it’s important to find a balance between being vigilant and knowing when to let certain things go. “A toddler is going to put a toy in her mouth and then hand that toy to another kid — it’s going to happen,” she says. “There’s only so much you can do about it.”

That relaxed attitude is absolutely key for Gabriella, a mother of four who lives outside of Miami, Florida. Gabriella, who also asked that her last name not be used, tells Romper that she tries “not to worry too much about catching germs from my kids.” She adds that some exposure to germs is probably good, as she imagines it would build up a healthy and strong immune system.

As Professor Jack Gilbert, co-author of Dirt is Good: The Advantage of Germs for Your Child's Developing Immune System, told The Independent, “Most parents think all germs are bad, that is not true. Most will just stimulate your immune system and make you stronger.”

But that doesn’t mean that all bets are off when it comes to germs and hygiene.

“We wash our hands before meals, after playing outside, when coming home from an outing, and any other time I feel it’s necessary,” says Gabriella. “It’s obviously important, but I don’t want it to become the kind of thing that we obsess about as a family.”

And when one of her kids is sick, Gabriella does everything possible to make sure the others don’t get it, too.

“I limit their contact with one another,” she explains. “It’s tricky with two kids in school and two still at home, but we do what we can to quarantine, keep illnesses contained, and keep the house disinfected.” According to the CDC, one of the best ways to keep illnesses from spreading is to avoid close contact, such as hugging or kissing, and to make sure to keep surfaces clean that may come in contact with germs — which is why many daycare operators give all the toys and furniture a bleach bath periodically. On top of all this, don't forget the 2018-2019 flu shot, coming to a PCP or pharmacy near you this fall!

The key takeaway from the common strategies between Summers, Kara, and Gabriella is that it’s essential to take whatever measures possible in order to stay healthy, but, as Kara and Gabriella point out, to let go of the rest. To an extent, illnesses are bound to happen.

And for that, Gabriella says, “there’s always a day on the couch with soup and bad TV.”

More Like This
Adult Gymnastics Brought Me Back To Myself
17 Best Potty Training Products For Toddlers
From Captions To Gifts, These Are All The Kindergarten Graduation Ideas You Need
Amid A Nationwide Shortage, Moms Are Using Social Media To Find Each Other Formula