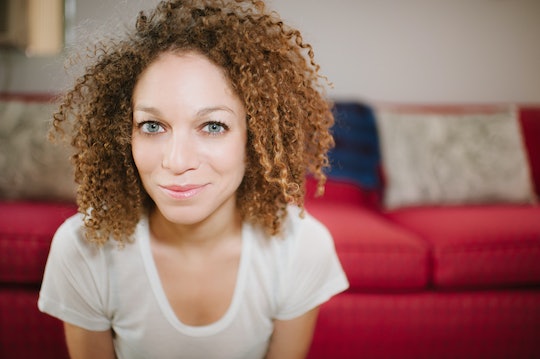 Want To Declutter? Take A Page Out Of Fay Wolf's Book, 'New Order'

No matter how often you clean out your closets or delete old emails, inevitably, things will, at some, point get cluttered. And the idea of trying to organize it all can be incredibly daunting. Enter Fay Wolf, actress, songwriter and author of the book New Order: A Decluttering Handbook for Creative Folks (And Everyone Else). Wolf has helped individuals clean out and create space in their lives for decades, including celebrities like Jesse Tyler Ferguson and Emily Deschanel, and now she's sharing her best tips with the world in this book.

If you want to declutter, you have to just start. "We get into the idea that it's all or nothing; organized or not," Wolf says, "which can keep us from doing it [decluttering]." But that's not necessarily the case. Wolf suggests starting with little things and "embracing imperfection."

The main reason Wolf believes in the importance of decluttering is to allow room for creativity. It's about "just being able to have space in the home, brain and calendar to do all of the things you've been putting off," she says. You know that novel you keep meaning to start? Or the dress you've been planning to sew? Wolf argues that you don't begin these creative pursuits because there're too many other unessential things taking up space in your life.

There is not one type of clutter; in fact, it comes in many forms. The most obvious is, of course, stuff. It's what we think of when we consider organizing our things: the clothes in our closets, the junk in our garage, the piles of old greeting cards from coworkers. But even if we know things are unnecessary, it can be hard to simply toss them. Wolf says that the first question you should ask yourself is, "Do I need this?" and get rid of anything that you don't. But that's not always as easy at it sounds.

Wolf suggests that a better way to ask the question and thus get better results, is by saying, "Does this represent the truth of who I am?" If the answer is no, it's time to get rid of it. If an item carries any negativity with it, then you should absolutely purge of it. Another question to ask is "Would I miss this if it were gone?" This one is especially good for clothes, says Wolf. Sure, you might think you like it and will wear it, but would you really miss it if it was no longer hanging in your wardrobe?

We often tend to keep items out of guilt. Maybe it was a gift from a family member, but you really hate it. Wolf says to remember it's your house, so you shouldn't keep anything you don't need or want. There are of course, exceptions to this rule. In about 5 percent of cases, Wolf says, there are other reasons to keep the item that have to do with empathy and kindness, and that is always okay.

But there is another kind of clutter that surrounds us, that is perhaps even more inhibiting than the piles of things in our spare rooms: digital clutter. "It happens so fast!" says Wolf. "There's no reason we should know how to handle it." But it's important to try to keep it under control.

Want to know the main way that digital clutter takes its shape? Notifications. Yes, those pesky red bubbles in the corner of your apps are actually causing you stress, decreasing productivity, and preventing you from cleansing to just the essentials.

"Be aware of how often you're checking and how many notifications you're getting," says Wolf. She speculates that about 90 percent of them are unnecessary; most of them we'd be able to find on our own, especially any of the ones that are important. And every notification is "taking away pieces of life little by little," says Wolf. Although the three seconds it takes to glance down at your smartphone when it lights up might not seem like a lot, those moments quickly add up. They distract you from the task at hand, and "the repeated action creates more clutter in our brains," says Wolf.

The first step to digitally decluttering is to get rid of what you don't need. Turn off all of those unnecessary notifications. Think about it — do you really need to be alerted at the exact second someone likes your Instagram? Or can you just see all of them when you log on waiting for the train home?

When it comes to organizing your life, to-do lists are a great tool, but Wolf says that too many people "don't have a trusted system. They have lists in various places, and can't always trust those lists. The power of using a really great to-do app can be life-changing."

By putting all of your to-dos in one space, you can assure yourself that you're not missing anything, and feel confident in the list you have created. Wolf recommends the app Wunderlist; she also encourages iPhone users to take advantage of Reminders. It comes preinstalled into the phone, and is a very efficient app, far superior to notes when it comes to making to-do lists. But whichever you choose doesn't matter, just that you do eventually choose one. Try out a couple of apps, find the one you like, and stick with only that.

The experience of decluttering has had a profound effect on Wolf's own life. Wolf began writing songs "because I had created the space for that," she says. She had cleaned out her space, and made room for her keyboard, so that it wasn't always packed up in a box. This lead to her writing music out of the blue, and it "turned into a career accidentally," she says. And what a career — her songs have been featured on top shows like Grey's Anatomy and Pretty Little Liars. And it's fitting that her music would be on television, since she is also on television as an actress. "It continues to all be connected," says Wolf.

Wolf's business of decluttering began ten years ago as just a side business, and has quickly grown into something much larger. She works with celebrities and non-celebrities alike, and reminds us, "We really all have the same stuff and are dealing with the same issues. There's no different hat I put on [to work with celebrities]." She spends the time in her client's houses having a lot of fun digging through inner and outer clutter, and really appreciates the clients who can go there emotionally. "They understand what it all means," says Wolf, "and also what they're getting out of it: lasting change."