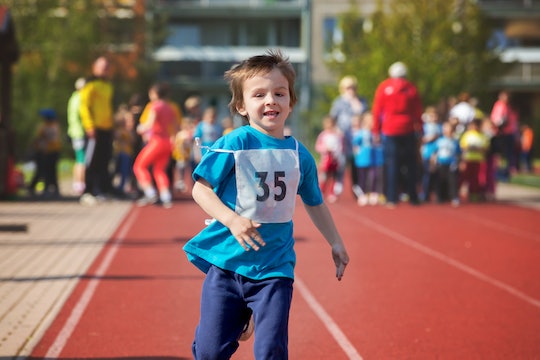 Want To Raise Great Kids? Teach Them To Be Losers

"Everyone gets a trophy!" The single-biggest corrupting force of the Millennial generation is supposedly our parents' efforts to boost our self-esteem by making everyone a winner. And sure, handing out a tie-first place ribbon to everyone does devalue the training and discipline that defines a winner, but I think the tide has turned on this strategy somewhat. We are beginning to understand more widely that we need to teach kids to be good losers, because everyone already knows how to win. In fact, a field of psychology has cropped up around righting the self-esteem bender we all went on in the '90s and '00s.

I am convinced that failure makes those times we do succeed even sweeter. My 3-year-old was ecstatic when he finally made it up the big climbing wall at the park, precisely because he hadn't been able to do it for months. Mastering something over time that is hard is so much more satisfying than simply being commended for an easy task. Still, the parental instinct is often to want to shower our kids in affirmation — "You put on your own shoe!" "You ate a chickpea!" "You hugged your friend without putting them in a headlock!"

If you use praise to express love, you will breed narcissists.

As much as we all want to boost our kids' self-esteem and make them feel proud and accomplished, we can be in danger of over-congratulating them, argues Laurie Endicott Thomas. In her book Don’t Feed the Narcissists! The Mythology and Science of Mental Health she writes that the tendency among parents to overstate their child’s abilities can breed narcissism. Apparently, this is something we worried about well before the 1990's. Aristotle, she explains, cautioned that one’s self-esteem should not be too high or too low. Recently, New York Magazine looked back on the self-esteem craze, describing the hype as "irresistible."

Thomas advises parents to be honest with their children about successes and failures so that they have goals to work towards, rather than just an inflated ego. “If you use praise to express love, you will breed narcissists," she tells Romper. "If you make children think that you will love them only if they win at some pointless competition, you will warp their personality."

What we talk about as "grit" is essentially being able to handle the inevitable disappointments that life throws our way. Resilience allows us to persevere toward our goals. Psychologist Julia Simens, author of Emotional Resilience and the Expat Child, tells Romper that we should be praising children's efforts rather than focusing on the outcome. She encourages parents to talk to their children about “skill development” rather than crossing the finishing line first. She tells parents to talk to their kids about the process rather than just the result regardless of whether or not they won or lost, suggesting encouragement like, “It looks like you put a lot of effort into that event.”

To help children to focus on the whole journey to becoming a graceful competitor, Simens lays out these steps:

Helping your child to become a good loser is more than just showing them that losing is a normal part of life. You need to model losing with grace.

New York-based career coach and success strategist Carlota Zimmerman tells Romper that teaching little ones to accept failure can have long-lasting benefits as they grow and develop into adults. She reminds us that in the job market failure is common and builds resiliency and fortitude. Winston Churchill, she argues, developed the tenacity and strength to lead Britain to victory over the Nazi’s through the setbacks he faced in life prior.

She suggests parents remind children that losing is just another part of life:

“Life is full of loss, and that’s fine, it’s still wonderful, still worthwhile, but no, you won’t always win.”

Is Losing Actually Good For You?

Losing can actually have benefits beyond simply teaching children the "if at first, you don't succeed try, try again” mantra, it has been shown to increase creativity and strengthen problem-solving skills. After all, once you know what doesn’t work, you can focus on finding ways that do work.

Losing with grace means that you congratulate those that did win and you don't throw yourself on the floor and have a tantrum. But of course, these skills need to be taught in a developmentally appropriate way. As a former elementary school teacher, I can report firsthand that you need to adjust your expectations to match your child's stage and temperament. We can't expect a 3-year-old to be happy to lose, but we can help them to start to develop these skills in small ways by doing the following activities, which I have used to encourage good sportsmanship among my students:

Kids stumble and fall and graze their chins.

Following these steps helps your little one to develop what Kaleigh Boysen, a marriage and family therapist, calls “frustration tolerance.” This is the ability to emotionally handle the uncomfortable feelings of disappointment and frustration that accompany episodes of failure. Boysen says that losing is an opportunity to teach your child many skills including resilience, perspective, and empathy. Kids can try to understand how others feel, which will encourage them to offer congratulations and praise to those that did win.

My son found it very difficult when other kids scrambled up that climbing wall with ease, and he couldn't. Sometimes he would pout or ask to leave, but over time as he persevered he started to say "good job" as his peers reached the top. When he finally managed it himself his little playmates cheered enthusiastically recognizing his determination as much as his achievement.

Kids stumble and fall and graze their chins. By teaching them a little about how to lose, you're giving them the skills to get back up, still smiling.