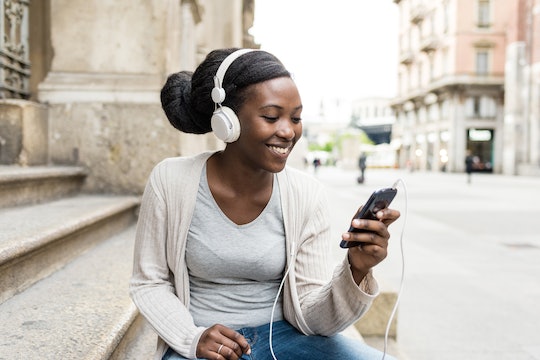 It's that time of year again... retail deals abound, scented candles are aplenty, and you're forced to take a good, hard look at your year-in-review. What better way is there to reminisce on everything you did in the past 12 months than to see what songs you listened to the most? Thankfully, one streaming service makes it really easy to do. So if you want to see what you listened to on Spotify most in 2018, here's how to access your personalized playlist.

The playlist is technically called "Spotify Wrapped," and you can access it at www.spotifywrapped.com. When you get to the landing page, there's an option to connect with a Spotify app, at which point you will be connected to yours, either via computer or smartphone. When you move to the app, the playlist will automatically open, and the first song will be your most played of the year, followed by a list of your other favorites.

But that's not all Spotify offers at year's end. Thrillist reported that the service also allows you to view the most streamed songs and playlists of the year as a whole, so you can also evaluate how your tastes lined up to everyone else's. (You can also use some of the playlists to check out super popular but lesser known songs that you might end up totally loving.)

As far as trends go, Thrillist also reported that the following were the top most listened to artists, who earned a combined 8.2 million streams altogether.

These were the most popular male artists:

These were the most popular female artists:

These were the most popular playlists:

These were the most popular podcasts genres:

However, for those not so amped on their nostalgia for the year, the playlist serves another purpose: to totally drag you on your questionable music choices throughout the year. Refinery29 reported that many people have been feeling particularly called out for their tastes.

"Spotify wrapped dragged on a COSMIC scale. I'll never recover. Good bye," one user wrote on Twitter. "I didn’t realize I went through such a Last Five Years phase until my Spotify [Wrapped] dragged me," said another. "Instead of “Your Top Songs 2018” it should’ve been called “Dragged by @Spotify” one more said.

Another really cool feature of the playlist? As Refinery29 pointed out, you can organize and view your most played songs and artists by zodiac sign, meaning that you can tell whether or not you prefer to listen to music by Libras, Pisces, or Capricorns... you know, if you're into that sort of thing.

So there you have it: your favorite songs, playlists, podcasts and artist right at your fingertips. Whether it's a cause for celebration or you're slightly embarrassed to listened to Justin Bieber 2,000 times this year, it's time to just lean into your truth and go along for the ride.