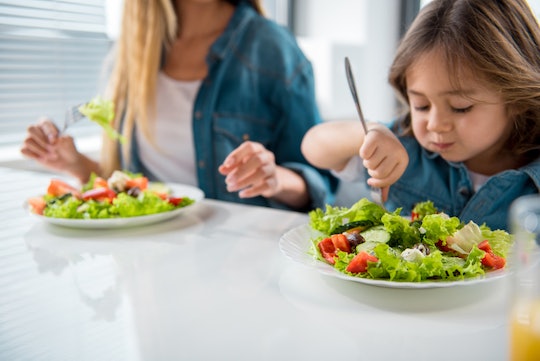 The battle to get kids to eat their vegetables is one that should go in the history books. You have a little more control when your kid is home at the dinner table, but what about when you send lunches with them to school? Having kids return with everything eaten but their vegetables can be frustrating. If you want your kid to eat more veggies, a new study says letting them help with the task can do the trick.

Let's be real, that's a lot of vegetables. Trying to get kids to eat some when they're away at school can seem like an impossible task, so you may be tempted to skip packing them altogether. But, one study found a pretty simple way to help get kids to eat their veggies at school.

A University of Illinois researcher found that almost half of the lunches that kids brought to school from home rarely or never contained vegetables.

But, if kids helped decide which foods to pack for lunch, the number of vegetables they brought actually increased, according to Medical Xpress.

Of the new finding, Carolyn Stutter, the study's leader author, said, according to Illinois News Bureau,

If you think about it, that makes sense. Letting kids make their own decisions about their lunch gives them more motivation to actually eat it. Raising Children even recommended allowing kids to help cook vegetables at home. When kids are brought into the process, whether it's cooking or shopping, they're more excited to give vegetables a try.

Instead, providing your child with autonomy and support may be more helpful in promoting healthy habit development, as noted by Medical Xpress.

"These parents may create guidelines and limits around what their child can pack in their lunch, such as requiring them to include a vegetable some days, but also be responsive to their child’s needs and dietary preferences," Stutter said, according to Medical Xpress.

The study found that parents are generally good about packing the appropriate amount of fruit and kids ate it, so most people don't need to worry about that, according to Illinois News Bureau.

If you've given up on packing your kids' vegetables, though, consider bringing them into the process. Eating shouldn't be a constant battle. Letting your kids have some choices about their daily lunches helps make it less so.