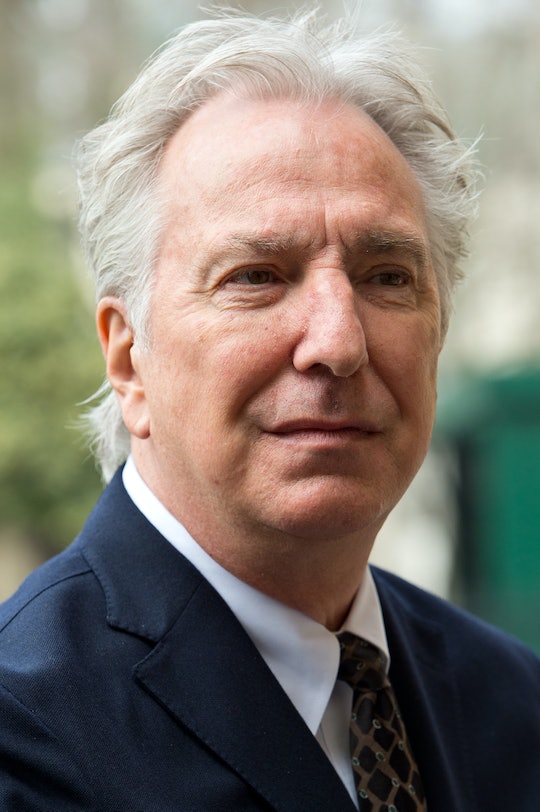 Was 'Alice Through The Looking Glass' Alan Rickman's Last Film? His Voice Is Iconic

Whether you were a fan of the Harry Potter or Die Hard films, Jan. 14 was a sad day for many movie and theater fans this year when Alan Rickman died of pancreatic cancer at the age of 69. Up until his death, Rickman was still actively working on projects last year, including one in the Alice in Wonderland live-action franchise from Disney. With the sequel premiering this Friday, was Alice Through the Looking Glass Alan Rickman's last film? In the most technical interpretation of the phrase "last film," Alice Through the Looking Glass was Rickman's last film — but Rickman had one other major film project he completed before his death.

Alice Through the Looking Glass marks Rickman's final film in that he returned to the role he voiced in Alice in Wonderland — Absolem, the Blue Caterpillar. Absolem is a CGI-rendered character for the film; at one point, the filmmakers considered rendering Rickman's face into the CGI caterpillar and even captured footage of Rickman's studio recordings for the film. (Thankfully, that idea was dropped.) If I'm really going to get down to brass tacks, Alice Through the Looking Glass wasn't really Rickman's "last film" — it was the 2015 British thriller Eye in the Sky that was Rickman's last onscreen appearance.

Eye in the Sky premiered at the Toronto International Film Festival in September 2015 and received a limited release mid-March of this year. For many Rickman fans, there's a very good chance they haven't yet been able to see Eye in the Sky: The film only just received a wide release in both the U.S. and the United Kingdom last month, with additional international distribution that continued up until just last week.

Rickman starred as Lt. Gen. Frank Benson in Eye in the Sky, a proactive, intense military thriller that explores the ethical complexities of utilizing drone warfare tactics in the ongoing fight against terrorism. Rickman shared the screen with other acting heavyweights including Helen Mirren and Aaron Paul. If you've missed seeing Rickman's brooding, steely composed demeanor on screen, Eye in the Sky gives fans one last opportunity to see his superb acting chops, as seen below in this clip from Bleeker Studios:

Is it Rickman's most memorable role? Not necessarily — Severus Snape, Hans Gruber, and the Metatron in Dogma each spring to mind before Eye in the Sky. But it is Rickman's last onscreen, live-action appearance. Rickman fans still have one more opportunity to at least hear Rickman's voice with Friday's premiere of Alice Through the Looking Glass.